The genealogy research and DNA testing for Group 8 has resulted in discovering several (at least 7) independent Group 8 Chandler lineages. At present, these subgroups of Group 8 do not have a common Chandler ancestor, and none of them have found the connection linking the group back to England. We continue to seek this common ancestor, and welcome any who can help us make this discovery. See the Group 8 chapter page – Chapter 8 – for new information.

In April 2008 the Chandler DNA Project’s Group 8 had a major breakthrough when a close DNA match was found between the group members who reside in the USA and testee John Anthony “Tony” Chandler in England. Tony’s earliest known ancestor is Robert Chawner born about 1590 in Leicestershire (pro­nounced Lestersher), England, and the earliest known ancestor of the Americans is Robert Chandler, born 1775 in North Carolina. The connection between the Americans’ Robert and Tony’s English lineage has not yet been identified, but that search should be significantly assisted by the geographic focus provided by this intercontinental match.

Later, another English group 8 member was found.  Andrew’s ancestry traced back to Warwickshire in 1782.  Warwickshire (pronounced Worricksher) and Leicestershire are adjacent counties, which is encouraging, though Tony and Andrew may find it hard to identify the common ancestor, because the nature of the DNA match could place him back in the 1600s or even earlier.

The Chandlers of Gilmorton, England

Tony has roots in Gilmorton, Leicestershire, reaching back to the late 1500s. It is quite possible that Robert Chawner’s father was William Chawner whose name appears as a Church Warden of All Saints Church, Gilmorton in Leicestershire, 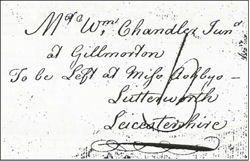 in 1585 and 1605. Existing papers of the Gilmorton Chandlers include not only vital event records, deeds and wills, but also a number of letters between family members who moved to London to conduct a successful undertakers (funeral home) business, and relatives at home in Leicestershire. These letters, more than 200 years old, provide a fascinating insight into family life of that period. Click the image at right for a glimpse into the life of the Gilmorton Chandlers in the late 1700s.

In Gilmorton, Leicestershire, and surrounding areas there are many Chandlers and even a school named Gilmorton Chandler, founded in 1774 by Edward Chandler to educate children within a Christian atmosphere. Read a narrative of Tony’s family – beginning with Tony’s grandfather James, born 1860, up to the present day.

on 8 July 1262 to his beloved servant William le Chaundeler of 47 shillings and 9 pence (modern value 28,000 pounds or 45,000 US dollars) issuing out of two carucates of land and their appurtenances in Medbourne. A carucate was an area of land that could be ploughed by one man in a season. Medbourne is about 16 miles east of Gilmorton. Analysis of English tax records for 1381 reveals a baker named Johannes Chaundeler at Hallaton, about 3 miles north of Medbourne. Both these men could be forebears of genetic family 8.

At the time the 1777 Land Enclosure Act became law in England, Gilmorton records show “William Chandler as proprietor of the residue of the said open and common fields and commonable grounds” and “Principal landowners are the Chandlers, a respectable family of which there are several branches who possess by far the greatest part of the Lordship.”

The 1846 edition of White’s directory contained the following:

GILMORTON. A large village, on a bold eminence, 3 miles N.E. of Lutterworth, it has in its parish 2,230 acres of land, and 866 inhabitants, many of whom are frame-work knitters. Sir W W Dixie, Bart. is the lord of the manor; but a greater part of the soil, which is mostly freehold, belongs to John Tebbs, Esq.; Wm. and Allan Bent, W Coltman, W Chandler, W Warden, T Woodcock, and several smaller owners.

Sources: Except where otherwise stated, the source of all birth, marriage and death information contained herein is the baptism, marriage or burial register of the parish church in the place where the event occurred, or a transcript thereof. These registers, together with wills, estate papers and other Chandler-related records, were viewed at the Leicestershire Record Office.

Of the seventeen USA testees in Group 8, two are descendants of Robert Chandler

born c 1775 in what is now Surry or Rockingham County, North Carolina. Robert, who died about 1848/49 in Carroll County, may have also spent time in Randolph County at some time during his life.

Robert Chandler is first found in Rockingham County in the 1800 Census and again in 1820. Property transactions and the 1810 census indicate that he also resided in the adjacent township in Stokes County, North Carolina. In turn, both these townships adjoin the state line with Patrick County, Virginia. Further complicating the situation is the fact that Stokes County was part of Surry County, North Carolina, until 1789.

Group 8 member Charles Thomas (Tom) Chandler, testee #26107, is the brother of then CFA vice-president Jacqueline Chandler Cahoon. Tom (and Jacqueline) and Lon A. Chandler, #24275, are descendants of Robert born c 1775. Lon is a descendant of Robert’s first wife, Judith, while Tom and Jacqueline descend through Robert’s second wife, Elizabeth.

Lon Chandler and Tom Chandler have a 36/37 DNA match, the mismatch being on marker 607.

Two members of Group 8 claim descent from George Chandler born c 1760 in Virginia. This has been the focus of much research and DNA testing for Group 8. The reason for this focus is that the lineage says that George Chandler’s father is Isaac Chandler (1732-1797), who is in Group 7A. Isaac’s position in 7A has been validated by multiple Y-DNA tests. At present, we conclude that either Isaac adopted George, or that our Group 8 George is not the George who is Isaac’s son mentioned in his will.

The fourth USA match further confirms the tie back to Virginia. Many of the given names are very similar to those in the families of the previous matches. Terry Melvin Chandler is a 36/37 match to Tom, with the mismatch on marker 607.

11 Mentions of George and his son James were found in “Reconstructed 1810 Tennessee Census,” located in Tennessee Archives: