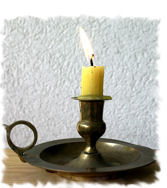 Chandler noun 1. A person who makes or sells candles. 2. A dealer in specified goods or equipment: a ship’s chandler. [Middle English chandeler, from Old French chandelier, from

Most people born with the surname Chandler in modern times are descended, in the male line, from men in England who worked as a chandler, making and selling candles. Until about 1350, surnames were only used by the wealthy and were usually inherited by only the eldest son, along with the family property. The poor – most people at that time – had no need for a surname because they had no land to inherit. It was during the years 1350 to 1450 that the use of hereditary surnames became common throughout the English population. This naming – often by trade (e.g. Baker, Smith, Chandler), sometimes by location (e.g. Hill, Marsh, or the name of a town or village), occasionally by appearance (e.g. Long, Small) – would have happened village by village throughout England. Consequently, most of the people acquiring the surname Chandler in this way would not have been related to each other – they would only have been occupied in the same trade.

Candles – of vital importance in an age without electricity – were made either of wax (for churches) or tallow (for general use). Tallow is obtained from suet (the solid fat of animals such as sheep and cows) and is also used in making soap and lubricants. The Tallow Chandlers, like many other tradesmen, formed a guild in London in or around 1300 for educational, promotional and charitable purposes. The Tallow Chandlers also dealt in vinegar, salt, sauces and oils. Later, the term “chandler” was used for corn chandlers, and for ships’ chandlers who sold most of the fittings and supplies for boats, as well as the candles. In the 18th and 19th centuries, the term “chandler” was often used simply to mean a grocer.

Some people born with the Chandler surname may descend from followers of William, Duke of Normandy, who invaded England in 1066 and ruled there until 1087. A Reginald le Chandeler appears in a survey of London conducted in 1273.1 The origin of the name is the same – the French for candle is chandelle.

The box at right illustrates the many spelling variations encountered in historic documents.2

Although its origins are probably the same as Chandler, the surname Candler is phonetically sufficiently distinct to be considered deliberately different and is therefore treated as a separate surname rather than a variant of Chandler. However, if you suspect that your Candler brick wall may have a Chandler connection, as was sometimes the case, you are very welcome to contact us.

At the age of 10, John Chandler and a number of other passengers sailed from England on the Hercules and landed at what became known as Jamestown, Virginia, in 1610. These were not Pilgrims like the Mayflower passengers who landed in Massachusetts 10 years later seeking religious freedom – this was a group of merchant venturers who made the voyage for profit. There are now thousands of people who trace their ancestry to that John Chandler, mainly in south-eastern USA. A number of them belong to the Chandler Family Association (CFA) and have participated in a DNA project to help identify their origins in England (see web page link below). Other DNA Project participants include descendants of:

Perhaps the most well-known bearer of the name is author Raymond Thornton Chandler, whose detective Philip Marlow has entertained millions of adults, while their children were thrilled by the stories of Uncle Remus and others, written by Joel Chandler Harris; the tales of the Boxcar Children written by Gertrude Chandler Warner; and by the many books for children written by Christine Chaundler. The character Chandler Bing was popular with many viewers of the TV series ‘Friends’. Actor Ira Grossel decided that his career in movies might fare better if he used the name Jeff Chandler. Chandlers controlled the Los Angeles Times for nearly 100 years.

Veterinary surgeon Dr. Alexander John Chandler founded the city of Chandler in Arizona. Other places called Chandler exist in Queensland, Australia; Oklahoma and Michigan in the U.S.; and Québec, Canada. Astronomer Seth Carlo Chandler, Jr., discovered the Chandler Wobble, a movement in the earth’s rotational axis which some believe is a factor in global warming. Dr. Robert Chandler did great work for the world’s hungry. Murray Chandler is a chess grand master who beat Gary Kasparov twice and never lost or drew against him. There have been a number of well-known Chandlers in the English Church, the United States Navy, and in politics. Congressman Ben Chandler represents Central Kentucky, following in the footsteps of his grandfather A. B. “Happy” Chandler, former United States Senator, Governor of Kentucky, and Commissioner of Major League Baseball. Edward Barron Chandler was a New Brunswick politician and lawyer, and is known as one of the Fathers of Canadian Confederation.

In America there were Chandler automobiles, and in England there are Chandler guitars. The U S S Chandler was a United States Navy destroyer, and Chandler is the name of a suite of computer programs aimed at helping groups of people to work on projects. The Chandeleur islands in the Gulf of Mexico form the easternmost point of the state of Louisiana, and La Chandeleur is a French festival, the equivalent of Candlemas in English-speaking countries.

If you think the Chandler name is limited to planet earth, there is a crater on the moon named Chandler.

Looking to the future, the former Kate Middleton, wife of Prince William and therefore likely to be a future Queen of England, is descended from a long line of Chandlers from Painswick in Gloucestershire, England, which has been a Chandler stronghold for centuries.

Frequency of the Name

Distribution of the Name

The Chandler surname is now widely distributed throughout the English-speaking world. In England, it occurs most frequently in the southern counties. If you draw a box starting at Stafford, south to Dorchester, east along the coast to Kent, north to The Wash and then westwards back to Stafford, you will have enclosed more than 80% of all the British Chandlers. The name is relatively uncommon in Scotland, Wales and Ireland.