On this page:
My Family Tree Booklet
Interesting links for Young Chandler Descendants

This section of our website is intended to provide information and help to younger genealogists, although all ages are welcome here. Genealogy is a record of your descent from your ancestors. You are a descendant of your parents, and also your grandparents, and their parents, and many generations before them.

You may wonder why we have names. That’s right, to identify ourselves. Parents have always given their children names, to make it clear which of their children they are talking to, or about. In a simple world with not many people, one name was enough – an example of this is the names in the Bible.

As communities grew, one name was not enough – people needed to know which John or Jane, because there were others in the community with that name. Sometimes people were described by the work they did – e.g. John the Baker, Richard the Butcher. Sometimes by where they lived – Jane on the Hill, Mary in the Wood. Sometimes by their appearance – Thomas Long, Hannah Small. But these names were given to just one person – they were not hereditary, meaning they were not passed down from the father to the children. So John the Baker might well have a son Simon who made pots when he grew up, so John Baker’s son would have been called Simon Potter. And if he changed his job to become a blacksmith, his name would probably have changed to John Smith. The only people who needed hereditary surnames in those early days were the rich and powerful, who owned land and wanted to pass ownership of that land from father to son. Everyone else could simply hand the few things they owned to their relatives at the end of their lives.

About 700 years ago, when the King of England needed to raise money and sent tax collectors around the country, they needed to record which families had paid their taxes. It was only then that hereditary surnames came into use for everyone. So you can see that people got the surname Chandler because of the work they did – making candles – not because they were related to one another. Most surnames ending –er, like Chandler, are occupational in origin, meaning that they result from the kind of work done by early ancestors – not one ancestor, but many of them, doing the same work in different parts of the country. As a result, today we think that there are Chandler families around the world who descend from about 150 different Chandler ancestors – we call these genetically distinct Chandler families.

You may wonder why candle-makers were called Chandlers and not Candlers. You have probably heard that William the Conqueror and his forces invaded England from Normandy in the year 1066. For many years after that, Norman French was used by those in power. One of the French words for candle is chandelle, and that’s how the name came to be Chandler originally. This would have been pronounced like shawndler, which is why the name is sometimes spelled Chaundler. The religious festival Candlemas is still a holiday in France known as La Chandeleur. Many towns have street parties, and most homes celebrate too. The favorite food is crêpes, which are like very thin pancakes, with fruit or savory fillings, which are eaten after 8 in the evening. It’s a lot of fun.

Can you imagine life without electric light? If you think about it for a minute, you will realize how important candles were in those early days. They were made either of wax (for churches) or tallow (for general use). Tallow is obtained from suet (the solid fat of animals like sheep and cows), and is also used in making soap and lubricants. Tallow candles 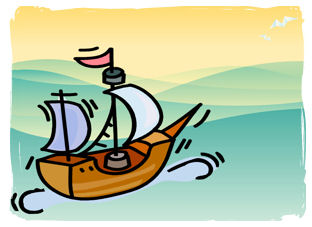 were rather smoky and smelly, unlike wax candles, which were more expensive. The Tallow Chandlers, like many other tradesmen, formed a guild in London in or around the year 1300 for educational, promotional and charitable purposes. The Tallow Chandlers also dealt in vinegar, salt, sauces and oils. Later, the term ‘chandler’ was used for corn chandlers, and for ships’ chandlers who sold most of the fittings and supplies for boats, as well as the candles. In the 18th and 19th centuries, the term ‘chandler’ was often used simply to mean a grocer.

We hope that you will keep your interest in the Chandler name, and maybe one day you will help us with some of the many mysteries and questions we are trying to solve. The detective work, and helping other people, is great fun and often very exciting.

This booklet was originally produced by the Federation of Family 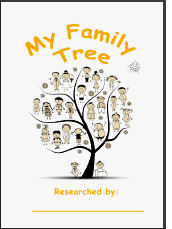 History Societies (FFHS), – renamed “Family History Federation” in 2020 – based in England, and was designed to interest our young people in family history. The CFA is a member of the FFHS and has permission to reproduce the booklet for our members.

You may download the booklet as a PDF (see printing cautions below) or request a printed copy from the CFA. The 5-1/2″ x 8-1/2″ booklet has 26 interior pages where you can add your family information and includes a blank family tree.

Note to parents: We have chosen these links carefully, but if you see anything here that concerns you, please alert the Web-Editor at
.