George Chandler and his brother John raised the money for the voyage to America and arrival expenses on 31 March 1686 by borrowing twenty pounds and twelve shillings from Robert Pyle of Stanton Barnard (Stanton St. Bernard), Wiltshire. Repayment was to be by means of a power of attorney forwarded to Robert Pyle Junior and Nicholas Pyle, already living in Pennsylvania. This document has given rise to misunderstanding about the name of George’s home in England, which has been read as Great Hodge. The correct name is believed to be Great Lodge, the name of a farm in Savernake Forest near Oare.

As can be seen from the “Olde Englishe” script illustrated at right, it would be easy to mistake an L as an H, especially in a copy of a document perhaps creased and stained.

There is dispute as to whether or not George and Jane left England because they were persecuted as Quakers. Their children are said to have been baptized in the established English church, but no such parish register entries have been located. On the other hand, their names do not appear in any English or American Quaker records, though they were closely associated with people who were Quakers, and they lived in a Quaker community in America. One argument made against their having Quaker sympathies is that money was sent from America to the church at Wilcot. This may be because the 1699 will of George’s brother John Chandler of Chichester, Chester County, Pennsylvania gave and bequeathed unto one Richard Edmunds of Worre [Oare] in Wiltshire a sum of money due to John by his nephew George Chandler of Pennsylvania [George’s son] to be disposed of as Richard Edmunds should see needful. It seems that Edmunds disposed of it for the poor of the parish of Wilcot, whose register states that, in 1702, George Stagg served as “Churchwarden for John Chandler’s estate” and in 1703 as “Overseer for John Chandler’s estate”. A charitable donation by a third party to the poor, distributed through the parish relief system, is not evidence of religious persuasion one way or the other.

It is not known when George Chandler, his wife Jane and their children, and George’s brother John left their home in Wiltshire, England or where they embarked to begin their voyage across the Atlantic Ocean.. . George died, possibly from smallpox, at sea near the end of December 1687. Customarily those small ships, with no motive power to withstand stormy seas, would depart England’s shores in the spring so as not to encounter winter’s gales. Contrary winds could make the journey take eleven weeks.

In his 1925 book The Parrish Family, Dillwyn Parrish includes the following unfinished sketch written by his grandfather Isaac Parrish based on oral history provided by his mother, who died in 1758.

Our ancestor of this name [Chandler] left England with his wife and seven children (four sons and three daughters), and embarked for Pennsylvania in the early settlement of the province. They were of the religious Society of the people called Quakers, who sought among the untutored children of the wilderness, that liberty to worship their Creator according to their consciences, which was denied them in their native land. On the passage to America, the husband and father of this family died. His widow and children arrived at the spot where Philadelphia now stands, and lived for a time on the banks of the Delaware in a cave. It is related that the cave was built over the stump of a tree, which served all the purposes of a table, and was a fixture in their plain and simple establishment. The affecting circumstance of a widow and eight [sic] children deprived in the course of the voyage of their natural protector excited the sympathy of the Indians, and family tradition gratefully records their kindness. They were in the practice of carrying venison to the widow and fatherless children, and on one occasion near the time of Christmas, when she was wishing for some substitute for minced pies, an Indian presented her with dried apples and whortleberries which answered the purpose instead of currants and plums.

The sailors carved a nutmeg grater for her on shipboard as a token of their sympathy.

One of the neighbors who had come with them to make a settlement for his family had built a house, and put some grain into the ground, and being about to return to England for his family, offered to the widow Chandler and her children all the benefits of his establishment. After residing some time in the cave, the widow and her family took up lands and formed a settlement on the Brandywine, in the neighborhood of Centre Meeting House, about seven miles above Wilmington. The daughter of this family was my great grandmother. Although a little girl when they arrived in this country, she well remembered her father’s death on ship-board. She married Samuel Robins, and had three daughters, of whom my grandmother, Sarah Mitchell, was one. The widow Chandler was in the practice of spending part of her time in this city, with her daughter, my great-grandmother, and part with her sons on the Brandywine. 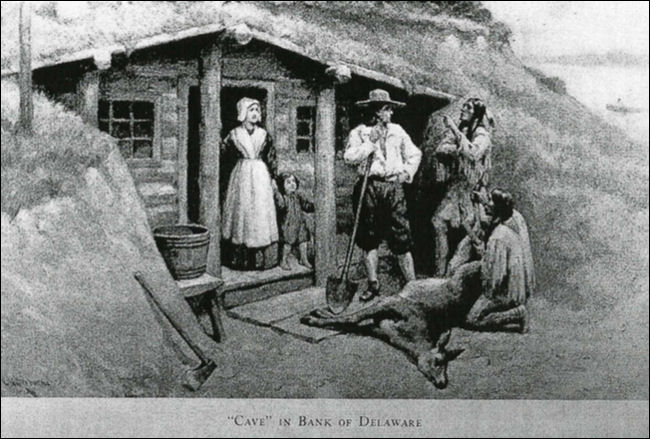 It must be realized that this rather romantic account was provided by an aged lady who was recalling her impressions gained as a small child. It is more likely that the food was provided by the native people in trade, as was customary – the small child may not have seen or understood a small payment being made in exchange for the food. The account fails to mention the mitigating factor that George’s brother, the childrens’ uncle, was present to offer some protection to the family. Pennsylvania was not a complete wilderness at the time, and food was plentiful. On the other hand, the life in a cave is not at all improbable. A number of settlers made temporary refuges by burrowing into the high banks of the Delaware river, creating three walls and a roof, requiring little reinforcement and only needing the provision of a front to protect against the weather (see illustration.) However, William Penn was agitating to have the caves evacuated two years before the Chandlers arrived, and by 1687 was pressing to have them destroyed.

The children of George and Jane who migrated to America were George, Swithin, Jane, William, Thomas, Charity and Ann. A son John, said to be born about 1668 but whose baptism, like the rest of the children, cannot be located, may be the John buried at Wilcot in 1684. George and Jane’s children were fruitful and did multiply. Jane was married again, to William Hawkes, and outlived him. Her brother-in-law John Chandler did not marry – he lived and died in Chichester and his will was proved in 1703.

George and Jane descendant Christopher Burns has provided photos of grave sites, located in Delaware, of a number of members of this family. Located in an area that was heavily populated by this Chandler line, the graves are located in cemeteries in Centreville and Wilmington. Visit our Chandler Graves (Delaware) page to view the photos.

A blog titled Chandler Family Chronicles, www.chandlerfamilychronicles.blogspot.com, is hosted by Peter A. Siegwald. Peter has published a number of original source documents on the blog and offers them to any fellow researchers. This blog will be of interest to anyone seeking information on the William Chandler line of the American descendants of George and Jane Chandler, Genetic Chandler Family Group 7B.