CFA descendants of Group 7A

The largest group in the Chandler DNA Project has been designated Genetic Family Group 7. DNA test results place more than 100 participants in this group, the seventh genetic family to be discovered by the project. It is believed the progenitor of all these participants lived in England; however, that common ancestor has not yet been identified. Consequently, based upon documented lineages from the year 1600 onwards, Genetic Family Group 7 has been divided into three subgroups: 7A, 7B and 7C. The earliest known ancestor of subgroup 7A is John Chandler, believed to be the John, son of John, christened at St Margaret’s Church, Westminster, London, England on September 7, 1600. 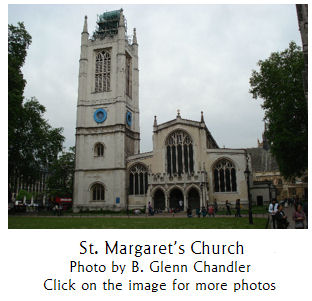 St. Margaret’s Church stands between Westminster Abbey and the Houses of Parliament. The present church was consecrated in 1523, making this the very building in which John Chandler, ancestor of a number of Chandler Family Association members, was baptized. It may prove to be significant that the church in which John was baptized was located in the most powerful political area in the whole of England.

On February 28, 1609, Thomas West, Lord Delaware, was named Governor of the English Colony in Virginia.

Recent reports of the dismal condition of the small Jamestown settlement there accelerated Delaware’s plan to go to Virginia to take personal charge of the colony. In early March 1609, he departed London for Virginia. 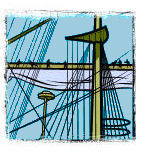 Until 1752, the New Year began March 25. So it was the year 1610 (although only a couple of weeks later) when Delaware, aboard the flagship De-la-Warr rendezvoused with the Blessing of Plymouth and the Hercules

of Rye at the Port of Cowes on the Isle of Wight.

Even though Delaware had restricted the passengers – no women or children allowed – nine-year-old John Chandler was aboard theHercules. No records have been found to document any relative of John Chandler among the three ships in Delaware’s fleet, nor in the Virginia colony at that time. However, given Delaware’s passenger restrictions, it seems likely that little John was in some way closely connected to someone deemed essential to Delaware’s enterprise. 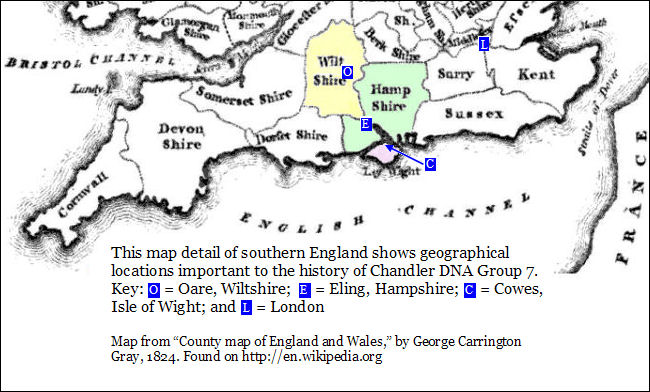 When John was in Cowes he was, tantalizingly, only about 10 miles south of the home of his genetic kinsman Richard Chandler, the earliest known ancestor of Group 7C, who would have been aged about 35 at that time. One day we hope to know the exact relationship between John and Richard.

From Cowes, the fleet set sail westward on April 1, 1610. After 12 days under good sail, the fleet reached the Azores Islands. The next morning a gale pushed the ships to Graciosa Island where they anchored, but on the 15th high winds separated the Hercules from her sister ships. Having lost sight of Hercules for several hours,

Delaware ordered the De-la-Warr and Blessing to proceed toward Virginia. Unknown to them, the Hercules was behind them, just beyond the horizon.

Hercules came over the horizon in the early forenoon and joined the two lead ships. On Sunday, June 10, 1610, 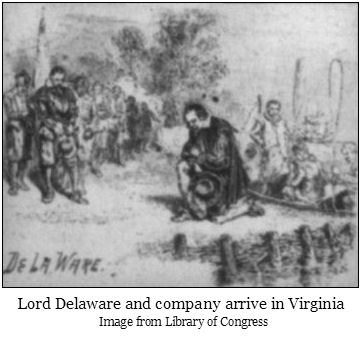 the fleet arrived in Jamestown.

After months of cramped living, John Chandler stepped off the Hercules onto Virginia’s soil. Thus he became — at nine years old — the youngest known immigrant to arrive that early in the colony.

Given his age and the fact that 75% or more of the colonists who came to Virginia during the Virginia Company years (1606-1624) either did not survive or returned to England, John’s survival and prosperity makes one of the great stories of the early years of Anglo-American colonization.

Documents of the time period between 1610 and 1622/23 do not mention John Chandler. It is not until the “List of the Living and Dead in Virginia”

was compiled in February 1623/24 that John Chandler is mentioned again. He was recorded at that time as a single man living in Elizabeth City County.

Elizabeth City was first settled about 1610 when Lord Delaware moved the newcomers into two small forts – Ft. Henry and Ft. Charles – near Kecoughtan and Point Comfort. Delaware’s plan was to isolate new arrivals while they adjusted to the heat of the Virginia Coast. Today this area is the city of Hampton, Virginia.

The next mention of John Chandler appears in the census of February 1624/25, where he is listed as a “servant” to Thomas Willoughby. The word “servant,” as used here, denotes what we know today as an employee, rather than indentured in the practice of the period.

Muster of the inhabitants of Virginia at Elizabeth Cittie.
Ensign Thomas Willoughby, his muster:
Servants:
John Chaundler ages [sic] 24 in the Hercules 1609 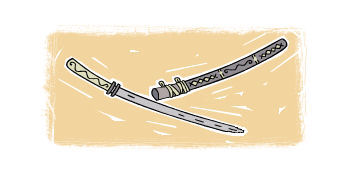 Thomas Willoughby’s household appears to have been a sort of military encampment consisting of five men who had full arms and suits of armor. Willoughby, the nephew of a heavy investor in The Virginia Company, had arrived in Jamestown a few weeks after John Chandler. It is surmised that he and John became friends since they were the same age. Willoughby was only 10 years old when he arrived in Virginia.

The muster record documents John Chandler’s age as 24 in February 1624/25. It indicates his arrival in Virginia on the ship Hercules occurred in 1609. This date is in error or perhaps arose from the precise nature of the question being asked of the colonists. Research shows that the Hercules did not arrive in Jamestown until the year 1610 as the third ship in Delaware’s fleet.

A “Charter of Orders” in 1618/19 authorized land grants to those surviving early settlers who had arrived in Virginia before Governor Gates’ departure to return to England in 1616. It has been widely assumed that John Chandler was one of those survivors, and he has been designated and accepted as an “Ancient Planter.”

But there is no proof of this, and, in fact, he was not one of the signers of a 1624 letter that says it contains the names of all the “Ancient Planters now living in Virginia.”

a member of The Virginia Company who came to Virginia in 1610 and settled in Elizabeth City. He died shortly before October 20, 1626 – the date his will (now lost) was offered for probate.

His widow, Elizabeth, was just 29 years old. Their daughter, Temperance, was only six.

Her late husband’s considerable estate, consisting of goods, servants and land, was most likely left to her in fee simple, which meant she owned it outright, without restrictions.

She also had 50 acres of land, patented in her own name on September 10, 1624. Thus the land of both Albiano and Elizabeth Lupo came into the Chandler family, where some of it remained until at least 1806, into the 7th generation of descendants.

By 1632 John Chandler was farming land that he owned or leased.

During this period, his fortunes advanced considerably. 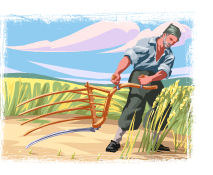 On July 6, 1636, he patented one thousand acres in the general vicinity of Back River in Elizabeth City County.

He received 950 acres for transporting, at his expense, 19 persons into the colony (the grant does not say this). The other 50 acres came through a grant for “the personal adventure of my now wife Elizabeth.”

Since Elizabeth was granted 50 acres in 1624 (presumably for her initial passage to Virginia being paid by herself or her family), the additional 50 acres was most likely for her having paid her way back to Virginia after visiting England. Of course, she could have merely purchased a headright in Virginia in her own name – perhaps between the death of her first husband and her marriage to John Chandler. That’s all speculation, but her independence and her standing as a woman doing business in her own name is noteworthy for the time. Located west of Harris Creek

and easterly toward Point Comfort Creek, John’s 1000 acres was a prime location for incoming settlers.

Between 1632 and 1639, John bought Newport News from John and Daniel Gookin, Jr.

A large portion of this land included a cattle plantation called Marie’s Mount.

The bulk of the tract lay in the long, narrow County of Warwick, which fronted the James River. Tobacco wharves and warehouses lined the river’s deep-water docks. The Newport News acreage along the Hampton Roads waterfront also included fresh water springs where ships navigating the James filled their water casks.

John later sold the Marie’s Mount portion of the land to Capt. Benedict Stafford, perhaps in the 1650s when his sons were forming their families.

By 1645, John Chandler had become a prominent man in the small colony, with several thousand acres of land in his possession. Large portions of the cities of Hampton and Newport News are parts of land once owned by John Chandler.

He was elected twice to the House of Burgesses.

(1) wealthier citizens were required to pay more property taxes; (2) the poll tax on those 16 and older was eliminated; and (3) frivolous lawsuits were barred.

Beginning in 1646 and until at least February 1657/8, John served as a County Court Justice,

of both a county judge and county commissioner today, exercising both legislative and judicial powers. As such, he traveled with the Elizabeth City County Court to outlying areas of the county – Accomac across the Bay and Norfolk across Hampton Roads. The last surviving record of John Chandler is dated February 12, 1657/58 when he was listed as present in a court proceeding

in Lower Norfolk. His date and place of death are not known; neither is the place of his burial. It seems likely that he and Elizabeth lie in unmarked graves of the third St. John’s Church in Hampton or perhaps on the 350-acre Chandler-Lupo tract, where a tentative homestead has been located.

He may have left a will; if so, it is now lost along with all of the early estate records of Elizabeth City County. There is no full record of his children, but the John Chandler who was born about 1627/8 and some of whose descendants lived on at least some of the Chandler-Lupo land until 1806 was surely his oldest son.

Robert Chandler who died in 1669 in New Kent County is most likely another son.

John is the only documented Chandler immigrant to Virginia before 1620. Several Chandlers did arrive in Virginia between 1620 and 1630. However, there is no documented proof they were related to the first John Chandler who stepped off the Hercules onto Virginia’s soil in 1610.

Married Susanna (?) circa 1668. She married second circa 1693 Thomas Waterson

Additional information about many branches and families can be found in some of the publications of The Chandler Family Association. Visit the Publications page for ordering information.

NOTE: This is a biographical sketch. Many more details are to be found in the March and October 1993, February 1998 and February 2000 issues of the Chandler Family Association Newsletter in articles by Joseph Chandler Burton, Jr., and in five articles by Joseph Barron Chandler, Jr. in Tidewater Virginia Families, issues of Aug/Sept 2000, May/June 2001, and May/June, Aug/Sept and Nov/Dec 2002, and sources cited therein.

7 The original list is in the Public Record Office in London, England.

9 Meyer, Virginia M. and Dorman, John Frederick, Adventures of Purse and Person. In many later sources and other books, the name is sometimes noted as “Joan” Chaundler in error.

14 Chandler, Annamae. The CFA Newsletter, June 2004, but the will is lost and what it actually said is unknown.

16 England and its American colonies did not adopt the reformed Gregorian calendar until 1752. Thus, the first day of year was March 25 (i.e. March 24, 1626 followed by March 25, 1627). Allowing a minimum of nine months from Albiano’s will probate in October 1626 would mean John II could not have been born before mid-1627.

23 Encyclopedia of Virginia Biography, Vol. I, Burgesses and Other Prominent Persons, pp. 207, 244

27 Encyclopedia of Virginia Biography, Vol. I, Burgesses and Other Prominent Persons, p. 207

31 Chandler, Joseph Barron Jr., John Chandler, 1610 Immigrant and Some of His Descendants, Part IV, TVF, Vols. 11, #2, 2002 (see entire article). In a triangular spot now named Robinson Park in the city of Hampton, in a vicinity referred to as the Chandler homeplace in 1749, lunch on the grounds was held during the 2004 CFA Annual Meeting.