In his more than 30-year career with the NYPD, Hiram would have seen many changes as the city grew. Creation of the New York City Police Department was approved by the New York state legislature on May 7, 1844. New York City’s population of 320,000 was previously served by a force consisting of one night watch, one hundred city marshals, thirty-one constables, and 51 municipal police officers. The new police force would include 1,200 officers and implement military style discipline and organization. An 1845 reorganization divided the city into three districts, with courts, magistrates, and clerks, and station houses set up in each. The NYPD was closely modeled after the Metropolitan Police Service in London, England, which itself used a military-like organizational structure. In 1857, a new metropolitan police force was established and the municipal police abolished. The Metropolitan Police Bill consolidated the departments in New York, Brooklyn, Staten Island, and Westchester County (which then included the Bronx), under a board of commissioners appointed by the governor.

Hiram was apparently wounded in these riots and hospitalized. At Bellevue Hospital in New York City, according to newspaper articles about this incident, Hiram was not expected to live. He did, however, and went back to work. He is recorded as being a court clerk in the 1868 City Directory and in later years as a policeman and a court officer. From newspaper articles about Hiram’s beating by the mob, we first learned that Hiram’s middle initial was “W”.

It is clearly recorded in the Hayes Family Tree records that Alamanda Hayes was Hiram Chandler’s first wife in about 1840. Alamanda was a daughter of Thomas Hayes (1782-1849) of Bridgeport, Connecticut, and Sally Greene (1785-1843), also from Connecticut. Hiram and Alamanda had one child, Charles Wallace Chandler, born June 1842. Alamanda died 11 months later on May 16, 1843.

Sarah Lydia apparently had a previous marriage because, in the 1860 census, Hiram and Sarah have a daughter named Mary, born 1842, who was also born in England.

By the time of the 1880 census Hiram’s household consisted of only himself, wife Sarah, and daughter Sarah, age 27.

Hiram Chandler died six days later, on April 21, 1881, from gangrene in his foot, the result of an injury from being run over by a trolley car while on duty, according to newspaper reports of the incident. Unfortunately, his death certificate does not list the names of his parents.

Hiram is buried in a family plot (#198) he purchased in New York City’s Cypress Hills Cemetery in 1857.

Hiram and Sarah’s two young sons, Edwin and Hiram, ages approximately 10 and 11, died in 1856 and may have been the first family members buried at Cypress Hills. A plan of the family plot does not make clear the location of their graves.

Charles Wallace Chandler was a postal worker and served in the Union army from 1861 to 1863. Charles died October 2, 1901, and is buried in the Cypress Hills family plot.

Five of Charles’ children are also among those buried in Hiram Chandler’s family plot in Cypress Hills Cemetery.

According to her death certificate, the middle name of Hiram and Sarah’s daughter Sarah was Franklin. Sarah Franklin, who married Thomas S. Mills, died on August 12, 1887. She is buried in the family plot at Cypress Hills Cemetery.

Jerry Chandler believes Hiram and Sarah’s son Frederick is his great grandfather. Frederick is somewhat of a mystery: born too early for a recorded birth certificate in New York City, no known death certificate in New York or New Jersey, and no known obituary in Jamesburg, New Jersey, newspapers. However, there is a New York City post office record of his death on June 18, 1917. (See image below.) 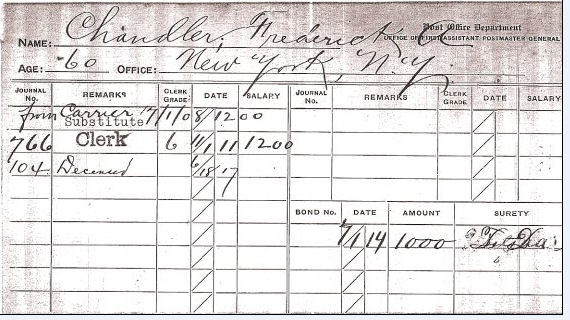 Frederick and his wife Matilda Julia Hale have tombstones in the Fernwood Cemetery in Jamesburg, New Jersey, even though the cemetery has no record of their burial. Frederick is also found in census records for 1880 (when he had traveled to Colorado and was working as a “wood chopper”),

Family legend, handed down from Craig Chandler Hay’s grandmother, Edith (daughter of Hiram and sister of Frederick), tells that Hiram was not particularly pleased with Frederick’s youthful lack of direction. Hiram apparently strongly influenced Frederick to make the timber-cutting trip out west to try to make something of himself. At that time, Frederick was already smitten with his future wife,Tillie, and didn’t want to go. This may account for the fact that his focus never really was on succeeding out west but was to get back to Tillie. The diary that Frederick kept while in Colorado, which is in the possession of Craig Chandler Hay, has many entries about missing his Tillie. Also noted in the diary is the day of Frederick’s birth, September 4, which was previously not known.

The census records of 1880 and 1910 note his birth year as about 1851, and the 1900 census gives his birth as September 1850. These dates closely match the birth year of about 1851 in census records of 1860 and 1870 when Frederick is listed with his parents, Hiram and Sarah Chandler. Also, in these census reports of Frederick as an adult, his father is listed as having been born in New York and his mother as having been born in England, thus matching the birth places of Hiram and Sarah Chandler. We also learn from these census records and Frederick’s marriage certificate to Matilda Hale

that his middle initial is “A.” It’s probable that the “A” stands for Augustus, since that name is also the middle name of Frederick’s son Fred.

In 1880 there is a voter registration record listing both Hiram and Frederick A. Chandler living at 512 East 118th Street, Manhattan, New York. That same address is also recorded in city directories from 1876 to Hiram’s death on April 21, 1881. It is also recorded as the address in his obituary.

After his retirement in about 1914, he and his wife, Matilda, went to live with their daughter Eugenia Chandler Wilson in Jamesburg, New Jersey.

Matilda died on April 24, 1927 at age 70, and is buried with her husband in Fernwood Cemetery, Jamesburg, New Jersey.

Most of the Hale family in Saugerties, New York, were seamen, sailing ships up and down the Hudson River. Many Hale tombstones can be found today in Ulster County, New York.

The four children of Frederick and Matilda were

Mary Loretta Grien’s grandfather was David Grien, a soapmaker and one of the first Griens to immigate to America from Germany.

and as a clerk or shipping clerk in later census records.

Jerry’s research on his Chandler family led to a contact from a young lady who turned out to be a great-granddaughter of Eugenia Chandler Wilson, daughter of Frederick Augustus Chandler, Sr. This person was able to put Jerry in touch with Ron Chandler Wilson, a first cousin of Jerry’s father and the only one of that generation still living. Jerry and his wife soon made a trip to meet Ron and his wife Marge at their home in Jamesburg, New Jersey. Ron shared photo albums that had belonged to his mother Eugenia and was able to tell Jerry a lot about the Chandler, Wilson and Hay families. On the visit to Jamesburg, Ron took Jerry to the cemetery where his great-grandparents are buried. They also visited the area where Ron’s father managed a giant ice house next to Jamesburg Lake and to the Smutt Factory where he was a foreman after the ice house was closed.

Jerry later contacted his second cousin Craig Chandler Hay, a descendant of Edith Chandler who married Harry Hay. Craig shared documents and photos; he also has a diary kept by their great-grandfather Frederick when he went to Colorado to cut down trees in 1880. In the diary, Frederick tells of missing his “lovely sweetheart Matilda.” They were married later that year in New York City.

The contacts made when doing genealogy research are an often underrated benefit. As in Jerry’s case, the result of such contacts can lead to rewarding experiences with previously unknown relatives.

Much of the information on this page is from the files of Jerry Chandler (email:

), a descendant of Hiram Chandler and a Chandler DNA Project match to Family Group #48. No evidence has been found specifically identifying the parentage of Hiram.  However, Jerry has assembled a substantial amount of plausible circumstantial evidence suggesting that Hiram was probably the son of Vincent Chandler born Milford, Hunterdon County, New Jersey, about 1770 who married Sarah McLean, and possibly the grandson of Robert Chandler born in New York about 1750 who married Caty Smith.  Information supporting these theories can be found in a 4-page document provided by Jerry.

9 Cook, Adrian. The Armies of the Streets; the New York City Draft Riots of 1863 (Lexington: University Press of Kentucky, 1974).

16 Cutter, William Richard, Genealogical and Family History of the State of Connnecticut: A Record of the Achievements of Her People in the Making of a Commonwealth and the Founding of a Nation, (New York, N.Y.: Lewis Publishing Company) Vol. 3, page 1407, Hayes Family.

41 Obituary for Matilda Hale Chandler, April 25, 2917. Copy in the files of Jerry Chandler.

42 Obituary for Matilda Hale Chandler, April 25, 2917. Copy in the files of Jerry Chandler.

45 Obituary for Matilda Hale Chandler, April 25, 2917. Copy in the files of Jerry Chandler.

52 Ireland is given as the birthplaces for both of Sally’s parents in the 1920 U. S. Census, Manhattan Assembly District 22, New York, New York, Roll 31109_4314018, Page 9B, Enumeration District 1463, Image 602. Found online at ancestry.com. Jerry Chandler’s files contain information on the dates and places of birth of William John and Sarah McGlyn Jones.