Enos Chandler, born 1806 in Connecticut, is the earliest known ancestor for the genetically distinct Chandler family designated #47 by the Chandler DNA Project. His wife, Zilpha Tallman (1818-1901), was born in Rhode Island, and they were married 19 May 1839 in Thompson, Connecticut. The registration of their marriage says they were “both of Johnson R.I.”

Enos and Zilpha are included in the 1870 United States census as residents of North Easton,

Washington County, New York. (See census image above, where Zilpha’s name is badly misspelled.) Also in the household are Enos Chandler, Jr., age 23, and John B. Chandler, age 14. Enos, 65, is listed as a shoemaker and Zilpha, 51, as a housewife. Enos Jr. is a teamster; the occupation of 14-year-old John B. is given as “works at the meat market.” The 800 in the census record indicates that Enos had a “personal estate” worth $800.

According to a biographical article published in 1885 about his son Albert, Enos was a boot and shoe merchant in Troy (Rensselaer County), New York, whose father was a commissioned officer in the regular army and died soon after his retirement.

Enos and Zilpha are buried in Greenwich Cemetery, Greenwich, New York, and Zilpha’s name is misspelled again on her grave marker (see below).

Children of Enos and Zilpha included

Enos Jr., Albert L., and their sister Mary Jane all had children; no information has been found about children of the other siblings. Mary Jane Chandler and her husband “Mr. Griffin” had a daughter named Mary. Mary was born in Albany, New York, between July 1871 and May 1872.

She married Franklin Tucker on November 4, 1879.

We have some details of the lives of sons Enos Jr., who remained in Washington County and died in his thirties, and Albert L., who left the family at age 12 to seek his fortune, with considerable success, in Michigan.

Enos Chandler Jr., his wife Mary, and their two children lived in the historic village of Greenwich in Washington County. Located on the banks of the Batten Kill, a nationally recognized trout stream, Greenwich has been called “the most extraordinary, beautiful and architecturally intact village in all of upstate New York.” Nineteenth century storefronts line Main Street and the downtown area is surrounded by stately Greek revival and Victorian homes.

Because the historic identity of Greenwich has been so well preserved, Enos would probably feel right at home there today.

Although he was a member of the Rough and Ready Engine No. 2 firehouse company, Enos Jr. was ill (see his obituary below) and may not have been able to attend the fifteenth annual 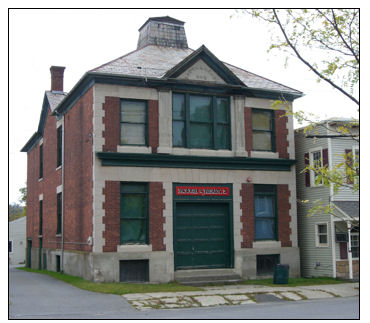 ball and supper of the company held at the Opera House in Greenwich in early February 1884. A writeup in the February 14, 1884, issue of The People’s Journal, a local Greenwich newspaper, states that members of fire companies from nearby towns were present for the occasion. After dancing in the early part of the evening, a midnight supper was served to about 100 people.

This photograph at left of the historic firehouse of Rough and Ready Company No. 2 on Main Street in Greenwich, New York, was made in 2009 by Charles Enos (Chuck) Chandler III, a direct descendant of Enos Chandler Jr. who was a member of the company. 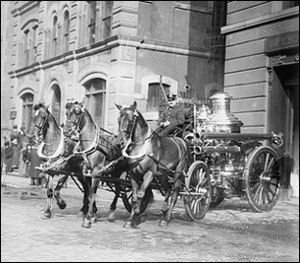 Enos Chandler Jr. died February 14, 1884. His obituary (below) was published in the February 21 edition of The People’s Journal: 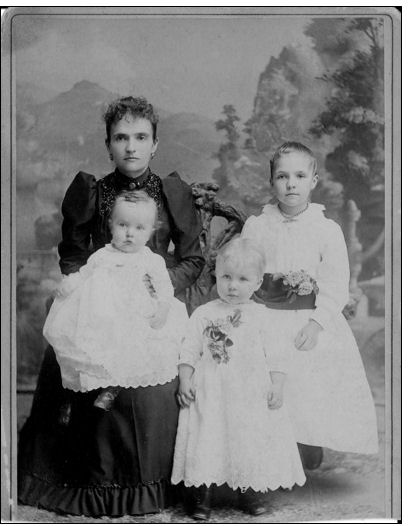 Mary Ann (maiden name unknown), the mother in the portrait at left, was married to Enos Chandler until his death in 1884. Mary Ann and Enos had two children, Charles Enos, born March 31, 1876,

The portrait of Mary Ann and the children was produced by Arnold Photographic Studio, 45 Main Street, Greenwich, New York.

Charles Enos and his sister Emma are listed in the 12 June 1900 U.S. Census in Shiawassee, Michigan, perhaps under the care of their Uncle Albert (see below). According to family legend, Emma died of TB, possibly between 1900 and 1910. Charles married Nellie Derr about 1901 and had 4 sons: Albert, Harold, Kenneth, and Charles Enos II. All were born in Michigan except Kenneth, who was born in North Dakota. Albert died at about age 10 of complications from being kicked by a cow.

According to a biographical article published in 1891,

Albert L. Chandler, brother of Enos Jr., left home as a boy of 12 and went to Michigan. It would be interesting to know more of his early story: did he travel to Michigan on his own or was he possibly in the care of family friends? At any rate, once in Michigan Albert went to work “for himself” on a farm. He saved money and then went to school in Sturgis, Michigan. Working his way through, he graduated from high school in 1872. Albert then continued his education at Hillsdale College in the town of Hillsdale in rural southern Michigan. He stayed at Hillsdale College — teaching, working and getting an education — for six years. In 1878 Albert returned back east to read law, spending time in the law library of Syracuse, New York. Perhaps he was able to reconnect with his family during this time.

Returning to Shiawassee County, Michigan, Albert was principal of Vernon High School for two years and in 1881 was admitted to the bar of Michigan at Corunna. Although he had partners in his early years, Albert later settled into a solo practice.

Abert had diverse interests and activities beyond the practice of law. He enjoyed “the quiet pursuit of agricultural affairs” and owned several farms where he raised registered cattle and hogs. He managed the Shiawassee Paper Mill in Shiawassee Township for Godfrey and Clark of Pittsburg and also served as a special correspondent for various newspapers in the state. As of the date of the biographical article, he had served as city attorney, as deputy master of the Independent Order of Odd Fellows, and as a representative from the county to Republican state conventions.

He was defeated in a political race for U.S. Representative from Michigan in 1912.

Albert is listed in the Michigan State Bar Journal as one of six attorneys practicing in Owosso, Michigan, in 1921-22. Corunna and Ososso are both in Shiawassee County.

The only comment in the biography about Stella after the marriage says “Mrs. Chandler is a Presbyterian in her religious views and is a valued member of the church in this city.”

In researching the family of Enos Chandler Sr., Charles Enos (Chuck) Chandler III came across clues that indicate the Chandler

and Meader families were at least neighbors, if not friends. John B. Chandler, younger son of Enos Sr., is shown in the 1870 census (see image at top of this page) as working “at the meat market.” Chuck believes John may have worked at Meader’s Meat Market in Greenwich, New York. Perhaps young John sometimes drove the “free-delivery wagon for orders received, kept in connection with market.” The advertisement is from a city directory of the period.

5 Charles Enos (Chuck) Chandler III pulled together the list of Enos and Zilpha’s children from clues in a number of different sources, which included the following:

12 Handwritten identification on the reverse of the photograph. Photo in possession of Charles Enos (Chuck) Chandler III.

13 Information from reverse of photograph.