Christopher Chandler, a grandson of Thomas Chandler born 1740, had a child “outside” his marriage. The mother was Rebecca Jordan, daughter of a freed slave previously owned by Christopher’s mother Mary Jordan; the child was named William Edward Chandler. It was common practice in Barbados at the time for a white man to have a colored mistress and for a particular “outside” child of that relationship to be chosen to live with the family. William Edward was raised in the plantation homestead with the legitimate family, and there he was educated by his father and given lessons in French by a tutor who visited the home.

Christopher died, probably during a cholera epidemic, and was buried in Speightstown (pronounced Spikestown) on 27 May 1854. When William Edward was about 19 years of age, after his father died, he disgraced himself in some way. There is a story that he threatened his half-sister with a horsewhip. As serious as that would have been, it does not seem to be enough reason for him to leave Barbados under a cloud and travel to Australia. Perhaps his presence in the home was no longer welcome after the death of his father. The precise details of his migration are not certain, though his uncle, also named William Edward, owned or was otherwise involved with a trading ship, and young William acquired a star and anchor tattoo on his left arm, so it is possible that he worked his passage, eventually arriving in Australia. It is doubtful that he would have had much money, as Christopher died without leaving a Will.

William Edward landed in New South Wales, Australia, in 1855 or early 1856. In 1866 he crossed the state line and took part in a bank robbery in the northern coastal town of Mackay, Queensland. The Australian Joint Stock Bank was robbed of 746 pounds (worth about US$700,000 in today’s terms) by two armed men, described in a newspaper report as Henry Ford, alias Billy Billy, and William Chandler, a mulatto alias Yellow Billy.

The newspaper report incorrectly identified William Chandler as Yellow Billy: there were in fact three aboriginal men nicknamed Yellow Billy, none of whom were William Edward. Having returned to his home town of Inverell in New South Wales, William Edward Chandler was captured in a public house there, tried, and sentenced to 20 years imprisonment. His details on entry to Brisbane prison in 1866 were: 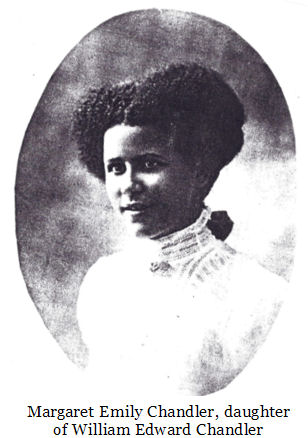 During his time in gaol, he established a life-long friendship with William Jenkins, described as “a scholar, con man, highwayman, gentleman and friend”. Jenkins loved reading Shakespeare, Hugo, Dumas and other classics, and wrote poetry himself. On release, they set up in business together with Chandler doing saddlery and Jenkins tailoring, trades they learned in prison, and evidently became good citizens.

They later moved to a farm at Electra, about 20 miles from Bundaberg. Their housekeeper was Elizabeth Rollings, a widow with a young son. Later, Elizabeth became the wife of William Edward. They had eight children and named the first William Jenkins Chandler, after William Edward’s friend and partner. Six more sons followed, the seventh son being appropriately named Septimus Edwin, from whom one of our DNA project participants descends. Finally, a daughter, Margaret Emily, arrived in 1891 (see photo at right). William Edward died on 3 May 1900 at the age of 64 and was buried on Perseverance Farm, Electra. After the death of her husband in 1900, Elizabeth moved back to Brisbane, leaving her son Henry from her first marriage to run the farm.

The information on this page has been provided by Lesley Brent-White, great-granddaughter of William Edward Chandler. For further information, she can be contacted via her son Ian at