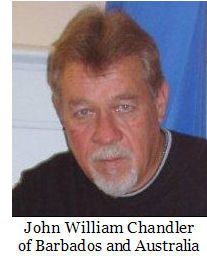 It was at the bottom of Chandlers Hill with about 20 steps going down, and trees from the top of the steps right down to the house, which was set back on a large block of land with corn and peanuts growing. The home was very low, made out of brick with a door and window in the front. On the left side was a door and windows that opened to the corn field, and on the other side was a kitchen with a chimney. There were always chickens and goats in the barn and yard. The land ran into Chandlers Gully, a pretty deep, rocky area with trees running right out to Chandlers Bay, which was two cliffs on either side with the sea in between, with sand between the gully and the sea except at high tide, when the sea ran into the upper part of the gully.

Leonard and Deborah were buried at St. Clement’s Church in St. Lucy Parish.