Frank Napoleon Chandler was the son of John Stephen “Jack” Chandler, born in Bisley in 1837, and Mary Ann Surfleet. He was the grandson of John Chandler (see The John Chandler Family), born 1784 in Minchinhampton.

When Frank Chandler was born in 1874, Jack wanted to name him after his hero, but Mary Ann, who was usually quiet, insisted on the church steps that no son of hers would be known as Napoleon, hence the baby was christened Frank Napoleon.There seems to be a certain poetic justice in the fact that Frank Napoleon rebelled against his father’s discipline. He was sent to live in Chicago with an uncle who considered adopting him. We know that Frank was in Chicago at the age of ten because a letter to his parents from Chicago dated 8 April 1884 has survived. Unable to cope with Frank, the relative returned him to England, where his ship docked early in Liverpool. Jack Chandler journeyed to meet his son, but Frank had already made his own way home to Alford by train. 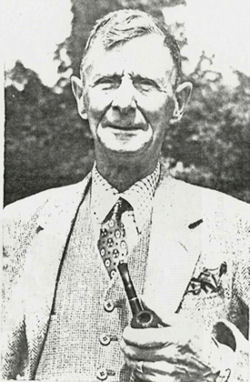 Frank married Eleanor “Nellie” Dales in 1901. They ran a public house called the King’s Head at Kirton in Lincolnshire but had financial difficulties and got into trouble for staying open after licensing hours. Frank decided to sell up and emigrate to Canada but did not tell Nellie until it was all decided. Having paid their debts, they had just enough to pay their passage to Canada with a few pounds left over. They visited all their relatives before leaving England in 1926 and stayed in touch with them afterwards, sending parcels during the war to many of their relatives.

Frank was a plumber, painter and decorator. They settled first in the Province of Quebec, but like many before them they made little headway because of opposition to English settlers by the local French-Canadian population. They moved to the town of Newmarket in the Province of Ontario. Nellie had a ladies’ outfitters and haberdashery shop at 120 Main Street, and Frank worked as a painter and decorator for 20 years. Although they were very keen to have children, they had none, so “adopted” Nellie’s niece who had been with them at the pub in England. Before Nellie died in 1954, she told Frank that, although she had a successful business, she made no profit. After Nellie’s death, Frank was convinced that the niece had been taking cash from Nellie’s business and decided to leave her nothing in his will. In 1955 Frank spent some time in England, visiting all his surviving brothers and sisters and nephews and nieces. His will left his money divided between his brothers and sisters and their children. He disposed of everything, leaving his book collection to the Newmarket Public Library, his clothes to the Salvation Army, his eyes to the Eye Bank of Canada, and his body to medical research at the University of Toronto. He died in 1960 and is buried in an unmarked grave at Toronto’s Mount Pleasant Cemetery.

Nellie’s niece, by then married, contested the will, and her solicitor wrote to each beneficiary advising them to give her a portion of their legacy to avoid the need to drag the matter through the courts. They all did so.

The engagement ring given by Frank to Nellie in the late 1890s is now worn in New Zealand by the granddaughter of Frank’s younger brother Jim.

Return to The John Chandler Family.

1 The information on this page is condensed from “The Chandler Family Story,” written by Fenella Rook Smith. This book was based on Fenella’s own research combined with information contributed by Chandler family members. Wherever possible, the genealogical facts have been validated against the records of the Chandler One-Name Study by its conductor, Dick Chandler.