The Chandler DNA Project has two participants whose results place them in this group: one is English and the other Canadian.  The earliest known ancestor of each lived in Mendham, Suffolk, England, and they were both named Henry, though one was about 50 years older than the other.  The relationship between these two men is not known: it is tempting to assume that they were grandfather and grandson, though conventional genealogical research indicates otherwise.  The common ancestor must therefore have lived prior to 1699.  The two participants agree on 36 of the 37 markers tested.

Julie, the daughter of the English participant and descendant of the older Henry, has provided the following vignette of two of her ancestors.

My Chandler ancestors lived in Suffolk, England, and between at least 1725 and 1911 this was in an area within a 10 mile radius. This area included Mendham, Fressingfield, Carlton, Withersdale, Leiston, Cratfield, Aldringham and Westleton.

The family occupation most commonly given throughout the generations in census returns and on certificates is bricklayer (journeyman), although there are a couple of instances of gardener and labourer.

The importance of the Chandlers in the village of Aldringham is shown by the naming of a new road, Chandler’s Way.

Thomas Edmund Chandler born 23rd Feb 1895 Aldringham, Suffolk
Tom was my grandfather. I was always told he was one of 16 children and I have recently discovered this to be true, and it seems they all survived out of childhood which was quite a feat back then.

At the outbreak of WWI Tom enlisted on 15th December 1914 and joined the Royal Army Medical Corps. He first served in Eqypt and was awarded the 1914-15 Star, British War and Victory medals. He was discharged on 23rd December 1920 having elected to reside permanently outside of the United Kingdom and went to Washington, D.C., USA to work as a butler in the British Embassy. His passport described him as 5ft 7¼ ins with a pale complexion, grey eyes and fair hair.

While there he met Agnes (Agatha), my grandmother, who was also from England (born just outside Henley-on-Thames in south Oxfordshire). She was working as the nanny at the British Embassy. They were due to visit the Knickerbocker Theater to see a show on 28th January 1922 but Agnes had received news that her father was ill and they didn’t go as she was too upset. That evening the theatre roof collapsed due to the weight of snow after a blizzard and 96 people died and 125 were injured. My gran kept a magazine detailing the event as a reminder that they had escaped death. Unfortunately, her father died in March that year.

Tom was quite a romantic. He wrote the following poem on the reverse of his photo – 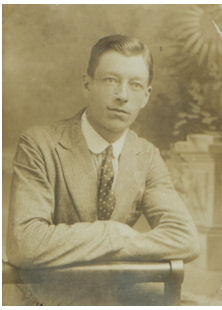 My heart is thine and soul and body render
Faith to thy faith; I give nor hold in thrall
Take all, dear love, thou art my life’s holder
Speak to my soul, take life and love, take all

To Agnes – the only girl I ever trusted without a question

I have traced the poem to Gilbert Parker’s book ‘The Right of Way’.

My grandparents remained in Washington and married there in June 1923 before returning to England for my uncle John to be born in 1925. My father was born in 1929.

By then they were living in Goring-by-Sea, Sussex for the benefit of my gran’s health which was much improved by the sea air. Tom became a well-known face in the local pubs and someone did a drawing of him in the Mulberry Inn in 1958.

Anyone able to provide more information about this family, or wishing to exchange notes, can contact them by clicking on the email address below.

If you do not have an email program installed on your computer (perhaps you use one of the online email services like Yahoo or Gmail), you will need to type the address into your message. In that case, please include “Contact genetic Chandler family representative” as the subject and be sure to include the family’s number – 19 – in your message.


Julie’s story of Edmund the bell-ringer reminds us of the famous Chandler family of Buckinghamshire bell-founders. Richard Chandler, the eldest and only surviving son of Anthony Chandler, blacksmith, was born in Drayton Parslow in 1601 and cast his first church bell in 1636. Several generations of Chandlers continued this business, casting bells as heavy as three thousand pounds.

At least one of these Chandler bells survived to the present day and rang out with its fellows across England to greet the beginning of the third millennium. It is not yet known to which genetic Chandler group the Drayton Parslow family belonged. It would be neat if the bells that Edmund helped toll for Queen Victoria at Fressingfield had been cast by his genetic cousins in Buckinghamshire, but this is unlikely since the two places are close to a hundred miles apart.