The story of nearly 300 years of this Chandler family is a history of human will and endurance, a struggle to educate themselves and improve their situation. Like most at the time, this family lived a hard life as agricultural workers – low wages, living frugally, and at times when the harvest was bad, teetering on the edge of starvation. Death sat at the head of the table, a constant reminder of the slim thread twixt life and the graveyard. This was especially true in the early years I write of. This was the time of “doff your cap and know your place!”

I stood in the sun in Headley, the home of some of my earlier ancestors, and was taken by the shadow I cast on the road, and thought of all the other shadows before me that had stood here: shadows all, of my former self, gone long ago! Were their shadows still a part of me, did I look like them, think the same thoughts, act as they may have done in similar circumstances?

I will recount my history as it unfolded during my quest to find out who I was and where I came from. Family lore was that they came from a small village named West Wittering in West Sussex.

I began by looking at the 1841 Census and found my great great grandfather James Chandler aged 40, occupation agricultural labourer, not born in Sussex. This information threw me a little, as I thought he was Sussex born and bred. I subsequently determined that James was born in Frensham, Surrey in 1799.

The village of Frensham is divided by the county line separating Hampshire and Surrey.

Some time early in the 1800s James moved from Frensham to the county of Sussex, where he met and married Mary Terry at St. Peter the Great in Chichester in October 1826.

James marked the marriage register with a cross, because he could not write. Why he moved from Frensham we may never know with certainty, though it was most likely in search of work.

Mary and James set up house at Shipton Green; this was probably just a collection of several cottages, all thatched, clustered together as if for protection. These clusters had ground that was tilled, and the occupants grew vegetables for their families.

Trouble was brewing in southern England over the introduction of agricultural machinery to farms, which angered the workers because it threatened their jobs. Farmers received letters, reputed to be from a Captain Swing, saying these ‘infernal machines’ would be broken up. The “Swing Riots” began in Kent and spread to Sussex, then Hampshire, where they culminated in an attack on the Poorhouse at Selborne, which was destroyed.

The courts dealt harshly with the rioters. Nineteen were executed, more than 600 were imprisoned, and about 500 were transported to Australia for life, or for terms of 14 or 7 years.

James and Mary waited two and a half years for the first child, named Mary: she died 18 months later in July 1830. John arrived, but died 16 months later in March 1832. Another John was born but died in September 1833. Three children lost one after the other in little more than three years! What tears and recriminations must these parents have gone through, until the fourth child, Martha, was born in 1835, followed by Benjamin (a recurring name in this family) in 1837, William in 1838, then Annie in 1840, Frances in 1842 and lastly Lydia Jemima in 1844.

In the census of 1851 James gave his occupation as Ag. Lab. (Agricultural Labourer). By 1871 he described himself as a farmer of 20 acres: no record of land ownership has been found, so James must have been a tenant farmer. He had made the first step towards losing the Ag. Lab. label. In the next few years he increased his land to 25 acres. James died on 3rd February 1873 aged 74.

Of Martha, the first child to survive, I know little. In the 1851 Census Benjamin aged 14 was described as a servant, probably in the local big house,

and he appears again in the 1881 Census in London’s prestigious Mayfair district, working as a butler in the household of a man named Hussey Packe, whose wife was an Earl’s daughter.

Benjamin married Ann Angell in London and lived at Fulham, a suburb of London.

This Benjamin was the first descendant to avoid the Ag. Lab. label.

My great grandfather William was described in the 1861 Census as a footman (a uniformed servant) aged 23 – another to break the Ag. Lab. mould.

It did not last, though: in 1881 we find him living at a dwelling named Itchenor Gate (more of this below) and described as an Ag. Lab. At that time the household comprised William and his wife Martha Wingate aged 40, and the following children: Benjamin Henry born 1868 (my grandfather – that name again), Mary Dianna born 1869, Bertha 1872, Frederick 1874, Martha Anne 1876, and Frances Lydia 1880. 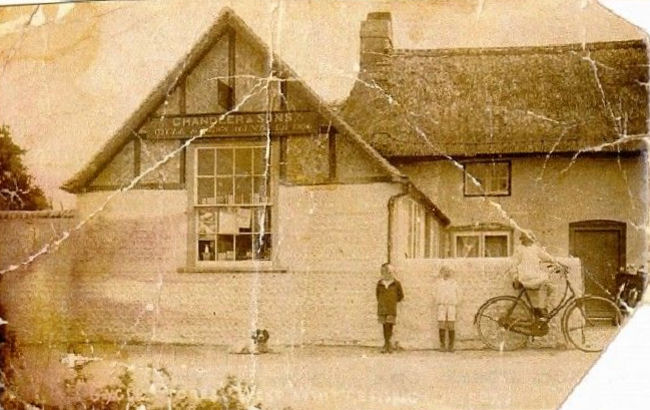 When I returned in 2006 to West Wittering I found a completely altered village. Where once stood Chandler’s Stores in which the village’s first telephone was installed, there was a small block of apartments, everything looking unplanned, with an adjacent house stuck at an angle as if there had been insufficient room square on. Not a thatched cottage anywhere. I drove along a country lane and came upon a house sign saying Itchenor Gate, the address of William in 1881. Where I believe once stood his cottage and five others was a single large modern house, standing in its own grounds, probably lived in by a wealthy family. I stopped, transfixed by what I can only call vandalism – a once-beautiful village, completely ruined.

William and Martha’s son Benjamin Henry was my grandfather. He married Amelia Charlotte White, who made her mark with a cross on the 1891 marriage certificate because she couldn’t write, though Benjamin could.

I believe that Amelia, my grandmother, was born in the Chichester Poorhouse. Her mother Julianna had three children there. One, my Great-Aunt Elizabeth (“Liz”) married a Royal Navy boatswain; both were very nice people and he died in 1935 at Worthing in East Sussex.

Benjamin was a shepherd, and had been all his working life until his untimely death at the age of 37 by his own hand. He was treated for cancer – incorrectly so in the light of later knowledge. He had a flesh-eating disease, for which he had nine operations in twelve months, leaving him with a terribly disfigured face and constant pain. Early in the morning two days after Christmas 1905 he got up and went to work, and in the barn with his sheep, he hanged himself.

After the coroner’s inquest the jury gave their attendance money to the widow Amelia. I don’t know what happened to her. I don’t think I ever met her. The children were all put into homes, and the boys were later sent to Army and Navy Training Schools.

The children of Ben and Amelia were: 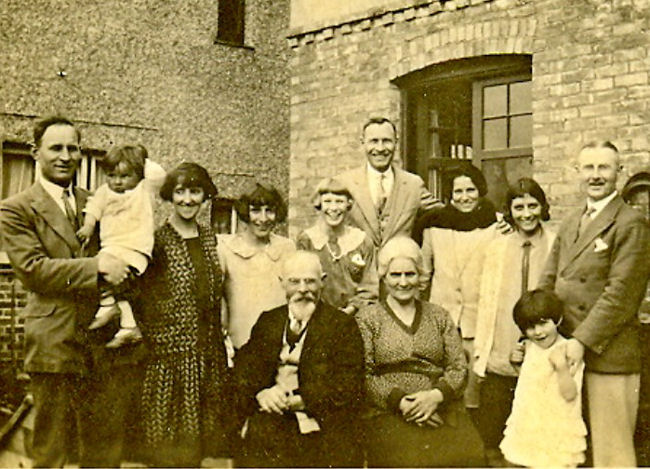 Family Group, 1920s
Standing, from left, are Stan’s father George, little Stan, his mother Rosa, two daughters of Frederick James, Fred and his wife. The little girl is Stan’s sister Esme. The couple seated are Stan’s Great-Aunt Elizabeth and her husband Harry Pratt. The other two standing are unknown.

Military service sometimes exacts the ultimate price. Like my cousin James, cousin Henry Eli Chandler was killed during the First World War, and his younger brother Leonard William lost his life in brutal circumstances in the Second.

It was in the late 1800s that education came to the villages, through the kindness of those who had already become literate and numerate. These folk would hire a small place in which to teach. At West Wittering, it took place in a small flint-built barn.

To cover costs they charged a fee of two pence for each child, or one penny for part-time attendance. William and Martha’s children were told that the family could not afford two pence and had to settle for the one penny school. William probably earned about twelve shillings a week, a shilling was twelve pence, so William and his wife would have spent nearly a twelfth of his earnings on education – rather a lot.

I imagine the first day at school for the children of William and Martha. A cold morning, a fire gradually warming the class, the children with smiling and expectant faces. Each child has a chalk and a slate on which to write their first letters. The teacher has fixed a notice on the wall behind her reading “Education Will Make You Free”, and she stands silent while the children settle down. The children now quiet, the teacher proceeds. “Children, you are here today to start learning your ABC, how to sign your name instead of making your mark, to go to the market and to know the prices of what you are buying. Look at the bare trees outside. Soon, when the sun warms them, the leaves will sprout, later the blossoms will come, then the fruit will form. This will happen gradually, and education will be to you as the fruit of the trees. You will blossom and you will be filled from the tree of knowledge. When that happens, children, you will be free and able to go out into the world like none before you. So now let us begin this exciting journey.”

So began the process of learning. This went on throughout the country, until it became universal.