The members of the thirteenth genetic family identified by the Chandler DNA Project are believed, on a preponderance of evidence and probability, to be descendants of Edmund Chandler, an early citizen of Massachusetts with land holdings in Duxbury, Dartmouth and Taunton. Edmund was affiliated with the Pilgrim group who arrived on the Mayflower, but he was a later arrival.

Most researchers believe Edmund (also spelled Edmond) Chandler was born sometime during the 1580s in England, the exact location unknown. 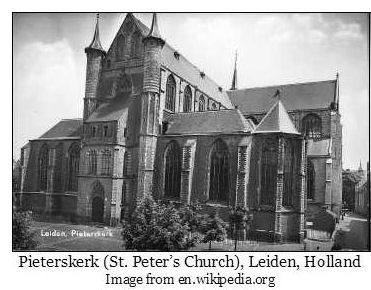 Edmund was a member of a group of English Calvinist religious dissenters, known as Separatists because they desired separation between the Church and the State, who fled England to Holland in order to avoid persecution under King James. He arrived in Leiden, Holland, where he was admitted to citizenship in 1613.

He was called a “say-weaver”, a weaver of coarse woolen cloths, though that may have been because it was one of the few occupations available to him. On March 26, 1619, Edmund buried a child at Pieterskerk (St. Peter’s Church) in Leiden;

he lived at that time in Nieuwestadt.

Edmund was probably related to Roger Chandler, who arrived in Plymouth Colony before him, as they were together in Leiden.

While in Leiden, in May 1615 Roger married Isabel Chilton, who was christened in Canterbury, Kent, England in January 1587. Roger arrived in Plymouth after the 1627 cattle division in Plymouth as he was not on the list of residents who received cattle and goats. (No descendants of Roger’s only recorded son, Samuel, are known, although daughters Sarah, Martha and Mary all married and have descendants.)

This Roger, of Plymouth, should not be confused with Roger of Concord, who with twenty others formed a party from Plymouth Colony which received a grant of four hundred acres in Concord in 1658 at which time, according to his gravestone, he was aged about 21.

Although Roger of Duxbury’s will does not include Roger of Concord it is still possible, and some say likely, that they were father and son. Certainly, the forename Roger was not common among early Chandler migrants to America. If Isabel Chilton Chandler was the mother of Roger of Concord, she would have been aged around 50 in 1637, when the child Roger was born according to his gravestone. This would suggest that the age on the gravestone is incorrect; not improbable since the stone seems to have been erected a considerable time after his death, and the age is inscribed as “about 80 years”.

Edmund probably arrived in Plymouth Colony in 1629 or 1630 as that is when arrangements were made to bring the last of the Leiden congregation over. A few stragglers may have arrived later, but in any case he arrived before 1633 as he was on the list of Duxbury freemen for that year, the first mention of him in the Plymouth colony.

Active in the governing of the town, Edmund was the Constable of Duxbury, the equivalent of chief executive officer, and twice was appointed Deputy to the Plymouth Colony General Court. Like many other colonists, he became active in acquiring large tracts of land by purchase and grants. 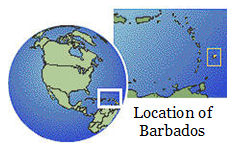 Edmund’s son John died about 10 years before his father. The only record that we have of him is his will. He died probably on board a ship, as his will was written on the way to Barbados in 1653.  He is not believed to have had a wife and children, because he left everything to his father or to his siblings if his father was not living.  His will is in the Barbados archives and was proved July 11, 1653. Below is the abstracted version of his will from the Barbados archives:

All my estate to Edmund Chandler  my father, living at New Plimouth (sic) in New England, if father is dead to my brothers and sisters.  Father to be Executor.  Goods in ship ‘Seaflower’, Capt. Miles Canaton Commander; friend Lt. John Dixon is to see that goods get to father, brothers or sisters.

Although genetic family 23 has deep roots among early Chandler settlers in Barbados, the DNA profile of 23 is quite distinct from 13, so the Barbados connection is coincidental.

Edmund’s will left his estate to his sons and daughters, so his second wife may have predeceased him. Edmund died in Duxbury, Massachusetts, between May 2 and June 2, 1662, the date his estate was inventoried. At the time of his death, he owned land in Duxbury, Dartmouth and Taunton.

Only two of Edmund’s sons, Joseph and Benjamin, are believed to have left descendants. Both had many descendants named John, creating confusion for researchers, especially because many early records are sketchy, incomplete or lost.  People researching their families would confuse one John with another, or the facts about one John would be misapplied to another. No descendants from Edmund’s other two sons, John and Samuel, have been found.

Although only twenty of the participants in the Chandler DNA Project belong to Group 13, the project is confident that Edmund’s DNA profile is defined sufficiently to identify his genetic kin when they participate in the project. The fact that Edmund and his associates were alienated from the established church in England increases the risk that church records about him may never be found, especially if dissent was a family trait. The Pilgrims came from many different parts of England, so their records do not help in the identification of Edmund’s origins. The main (perhaps the only) hope of a breakthrough lies in recruiting many more DNA Project participants with deep, documented roots in England. When one of these shows a kinship match with the existing testees of Group 13 and traces back to the 17th Century, the area of that family’s residence will be focused on for evidence of religious dissent and other clues which may make it a plausible place for Edmund’s origin. Most likely English counties are Norfolk, Suffolk, Essex and Kent, though participants with roots in other counties are welcome, since their branch may have moved from the ancestral area to another part of England.

Of all of the early Plymouth and Duxbury families, research into the Edmund Chandler family probably contained the most errors. Many old books about him that are riddled with errors continue to make rounds on the internet. Researchers have caught some of these mistakes. According to Eugene Aubrey Stratton, former Historian General of the Society of Mayflower Descendants, George Ernest Bowman was able to correct many of them. Descendants of Edmund Chandler have formed a chapter within the CFA which is devoted to furthering research on this family. See additional information about Edmund and his descendants on the CFA’s Chapter 13 Edmund Chandler Descendants page.

The main myths about Edmund are that he was the husband of Elizabeth Alden, owned a sugar plantation in the Barbados, and his parents were John Chandler and Jane Gitton.

For a detailed explanation, visit the Chapter 13 page dedicated to the myths.

3 Underhill, Lora Altine Woodbury. The Genealogy of Edward Small of New England and the Allied Families with Tracings of English Ancestry, Cambridge, Mass. 1910.

5 Leiden (Netherlands). Archives. and Harris, J. Rendel and Plooij, Daniel, and Amsterdam (Netherlands). Gemeentearchief. and Netherlands America Institute. Leyden documents relating to the Pilgrim Fathers, permission to reside at Leyden and betrothal records : together with parallel documents from the Amsterdam archives / Facsimile, transcript, translation and annotations by Dr. D. Plooij of Leyden and Dr. J. Rendel Harris of Manchester,74 phototypic plates ; Under the auspices of the Netherlands America Institute. Brill, Leyden : 1920.