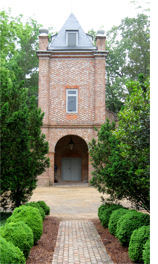 Erected: 1701
Denomination: Anglican
Location: from Route 33 (between West Point and Richmond), 1 mile north of Talleysville on Route 609 and approximately 1/2 mile on Route 642
Source: “Colonial Churches of Virginia” by Don and Sue Massey

On May 14 the Richmond Chapter of the Colonial Dames XVII Century placed a Virginia Historical Marker on St. Peters Parish Church in New Kent County, Virginia. It is the “First Church of the First First-Lady,” Martha Dandridge Custis Washington.Robert Chandler (1654-1720), grandson of John born 1600, was a parish member. He had children christened here as early as 1685 and into the early 1700s. The parish register is the only surviving record of his family in this area, as New Kent is a “burned record” county. The church is a tangible reminder to Robert’s descendants of their Chandler heritage.

The original wood-frame church was built by 1685. It was called “Broken-Back’d Church” which referenced its structural weakness. The vestry in 1700 ordered Col. Gideon Macon and Thomas Smith to purchase one acre to build the new “Brick Church.” The present building stood completed by 1703. In 1722 a belfry with a meeting room was added.

More about St. Peter’s Church from “Colonial Churches of Virginia”

More about St. Peter’s Church from “Colonial Churches of Virginia”: