Glenn Chandler, then CFA president, took advantage of a 2008 business trip to London to visit and photograph St. Margaret’s Church, a site that is important to all descendants of John Chandler of London and Virginia. The historic church is quite near many other famous London landmarks. 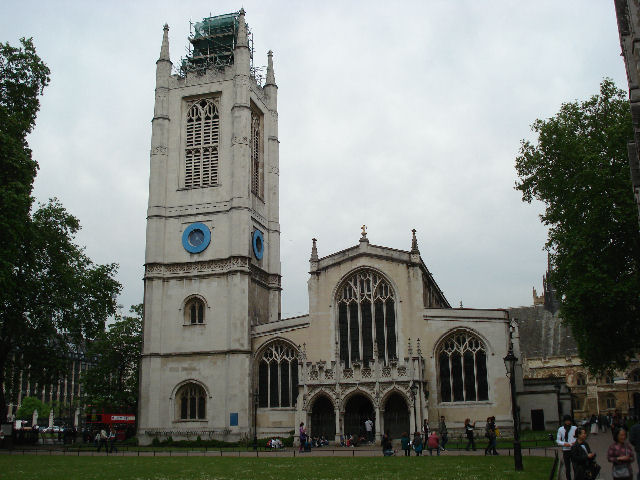 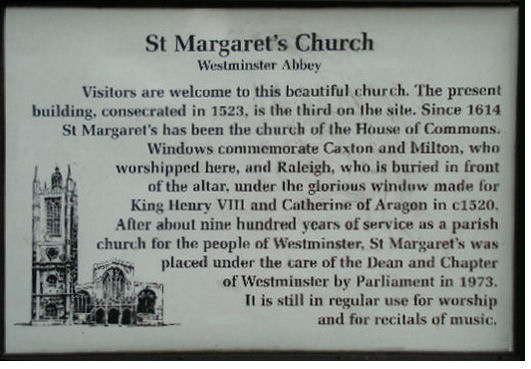 St. Margaret’s Church stands between Westminster Abbey and the Houses of Parliament and is often called “the parish church of the House of Commons.” The present church, the third on the site, was consecrated in 1523, making this church the building in which John Chandler, ancestor of a number of Chandler Family Association members, was baptized. Our John is believed to have been born in 1600 and baptized at St. Margaret’s on September 7, 1600. He arrived in Jamestown on June 10, 1610.

According to Westminster Abbey’s web site, St. Margaret’s Church was built on the Abbey grounds by the Benedictine Monks of Westminster Abbey, whose daily routine was disturbed by the local people attending church and receiving the sacraments at the Abbey. Margaret of Antioch, to whom the church was dedicated, was extremely popular in the middle ages but little is known of her today. The original St. Margaret’s was built in the latter part of the 11th century.

The parish of St Margaret’s originally covered a large area. The baptisms, marriages, and burials registers are extensive. The original registers, which include the baptism of our John, are kept in the Abbey’s Muniment Room. Microfilms of the registers can be consulted at the Westminster Archives Centre at 10 St Ann’s Street, London.

The facade of St. Margaret’s was cased in Portland stone in 1735. The tower was largely rebuilt in the 1730s and is an important example of early eighteenth-century Gothic. Within the tower is a ring of ten bells, the oldest dating from 1739.