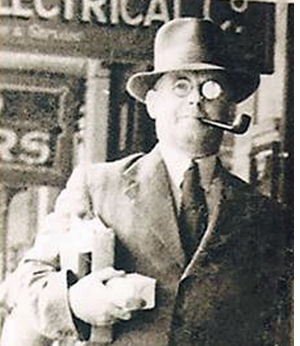 Errol Chandler (Chandler DNA Group #71) sent this photo of his father, Clement Leslie Chandler (who preferred his middle name, Leslie), taken on Oxford Street in East London, South Africa, in 1937. The left lens of his glasses is opaque due to a wound he suffered in WW1 which caused a partial loss of sight in that eye.

Leslie’s father, Josiah Clement Chandler, was a “gas engineer” for the family business, Kirkham, Hulett & Chandler, Ltd., of London, an English manufacturer of machinery used in the production and purification of coal gas. Josiah apparently was sent to Wales by the company, where he met and married a local girl. Leslie, eldest of five, was born June 4, 1893, in Pontybodkin, Mold, Flintshire, Wales, in a house called The Nant Cottage.

See photos and information on Kirkham, Hulett & Chandler, Ltd., and the coal-powered gas industry on the Chandler Sightings page.

Josiah’s job later sent him, and possibly the entire family, to Russia for a prolonged stay. In 1897 Leslie, age 4, was enrolled in school in London but was withdrawn after only 10 days. Errol thinks this is the point at which the family went to Russia so that Josiah would be on site to oversee the complicated installation of KH&C’s giant gas-producing machines. It is believed that Leslie, at least, spent a great deal of time there and attended an international school in Kiev, Ukraine.

The 1901 census of England shows the family living in London. As Josiah and Leslie were recorded on that census they must have returned to the UK and later gone back to Russia again, possibly more than once. It is understood that for a period only Josiah and Leslie were in Russia, while the mother and younger siblings remained in England.

Josiah Chandler apparently stayed in Russia (or at least traveled between Russia and England) until about 1909 or 1910. Leslie learned to speak fluent Russian, and that ability played a major part in his service to England during World War I and after. Errol is still pulling together that part of his father’s history, which promises to be a fascinating story including undercover operations, royal courier service, and diplomatic pouches. 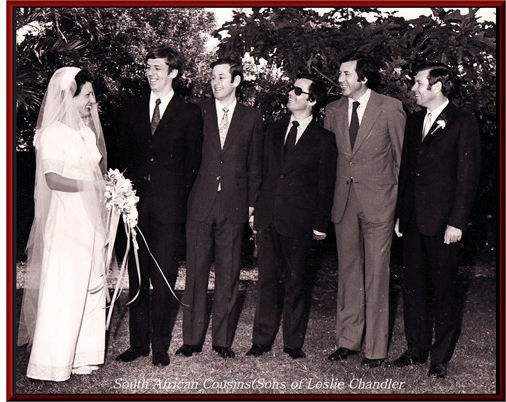 After an adventurous life during and after World War I, Leslie eventually settled in East London, South Africa, where he married in 1935. At that time he was an employee of the Union Castle Line which carried mail, merchandise, and passengers of the British Empire to and from its South African colony.

Leslie’s children are shown in this photo, taken in Errol’s garden in Durban, South Africa, on August 31, 1974, the date of his sister Julianne’s wedding. From left are Julianne (now deceased), Errol, Brian, Norman, Robin (deceased), and Chester.

Errol, now residing in England, and his siblings were all born in South Africa. Brian and Chester are still in South Africa, and Norman is in Botswana. All four surviving brothers are members of the CFA. 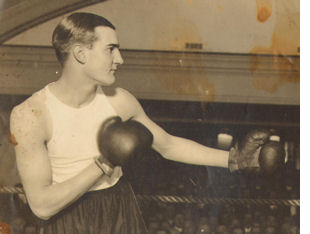 Ernest V. Chandler fought in England and the U.S. as an amateur boxer. He was educated at the City of London School, became a member of the Stock Exchange, became Amateur Heavyweight Boxing Champion of the World in New York in 1914,and served in WWI as a Captain in the Royal Field Artillery. See much more about Ernest’s sports career, life, and his tragic death.