Send a photo and information about historic Chandler grave sites.
E-mail Jim at 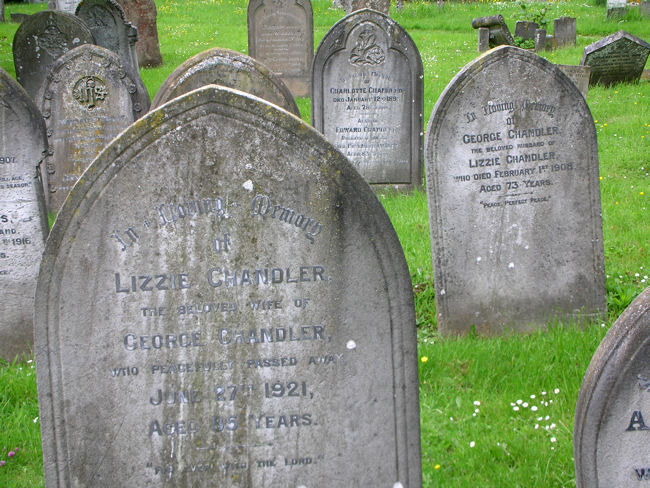 The three Chandlers whose grave markers are shown in the photograph above are all related to the photographer, Amy Chandler. At left is the marker for Lizzie Chandler, and the one for her husband George is at right and behind. Between and behind the markers for Lizzie and George is a marker for Charlotte and Edward Chandler, buried in the same plot. Inscriptions and transcriptions from the three markers are below. 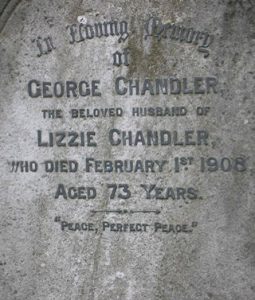 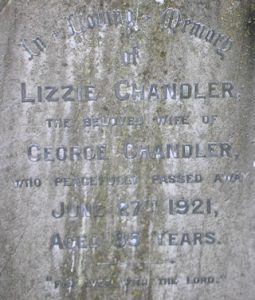 In Loving Memory
of
Lizzie Chandler,
the beloved wife of
George Chandler,
who peacefully passed away
June 27th 1921,
Aged 85 Years.
“Forever with the Lord.” 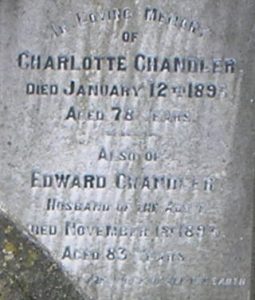 Also of
Edward Chandler
Husband of the Above
Died November 1st 1895
Aged 83 Years
“Shall not the judge of all the earth do right.”

Amy’s g-g-great uncle, Albert Chandler, owned a green grocer shop in Bedford, a photo of which is featured on our Chandler Sightings page. At her death, Albert’s wife Louise was expected to be buried with him, but a family dispute prevented that. Amy and other relatives believe Louise may not have a marker at all. The complete grave marker is at left below, with a detail from the marker and the transcription at right. 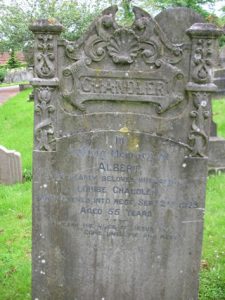 In Loving Memory of
Albert
the dearly beloved husband of
Louise Chandler
who entered into rest, Sept 2nd 1923
Aged 55 years

I heard the voice of Jesus say,
“Come unto me and rest.” 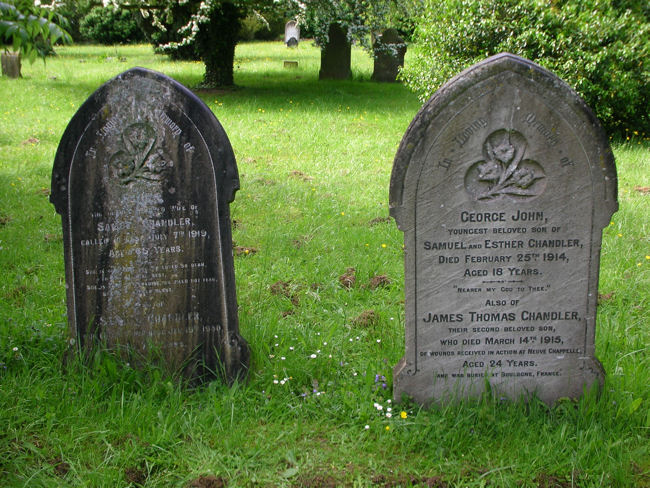 The photograph above was also taken by Amy Chandler (see her Chandler relatives above), but the four Chandlers memorialized by these grave markers are unknown to Amy. Tragically, the parents, Esther and Samuel, lost two sons at an early age, and Esther followed not long behind.The inscriptions and transcriptions from each marker are below. 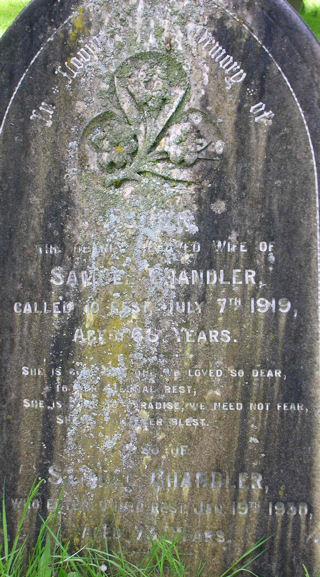 In Loving Memory of
Esther
the dearly beloved wife of
Samuel Chandler,
called to rest July 7th 1919,
Aged 66 Years.
She is gone, the one we loved so dear,
to her eternal rest;
she is gone to paradise,
we need not fear,
she is forever blest. 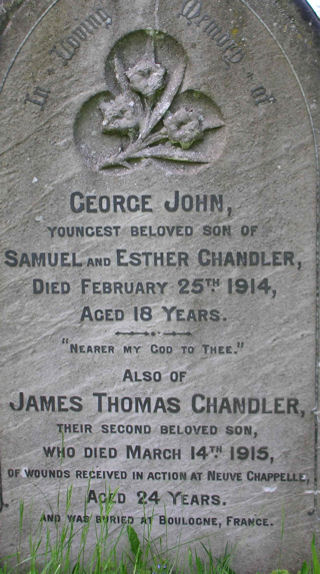 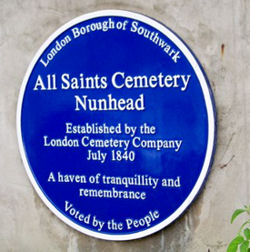 The BBC describes Nunhead Cemetery as “perhaps the least known but most attractive as well as being the second largest of London’s Victorian cemeteries.This pleasant 52-acre cemetery is a tranquil wilderness.”

CFA member Errol Chandler of Daycott, Somersett, UK, has provided a five-page PDF with photographs and transcriptions of Chandler grave markers in Nunhead Cemetery near London. The Chandlers in Errol’s document are all members of Genetic Chandler Family 71. Errol said, “The names that are not Chandler were those married to a Chandler in the family.”See more about this family on their DNA Group 71 Chandler Memories page and on the Chandler Sightings page (Albert Chandler, Fruiterer, Bedford, England, and Kirkham, Hulett & Chandler, Ltd., London). Among the Group 71 Chandlers buried at Nunhead is Ernest Vivian Chandler, World Amateur Heavyweight Boxing Champion, who died in 1936.Ernest’s story is told on this website on the family 71 Memories page

Reporting on his September 2013 visit to Nunhead, Errol wrote, “Most of it is totally overgrown and large areas are inaccessible. The war graves areas are kept tidy, but the rest of the place is largely a designated nature reserve, maintained with a ‘non-invasive’ policy. Fortunately the Chandler site is only 300 yards from the chapel and then about 30 yards into the ‘jungle’. The staff had to hack a path through to it to allow me to visit. …. The staff (of just two people!!) are currently looking for another monument for the Chandler family sites. It took almost 2 months to find the first one.” 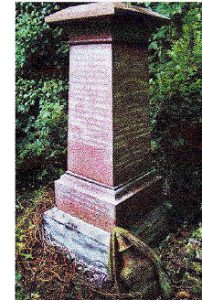 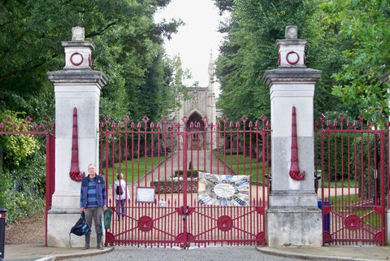 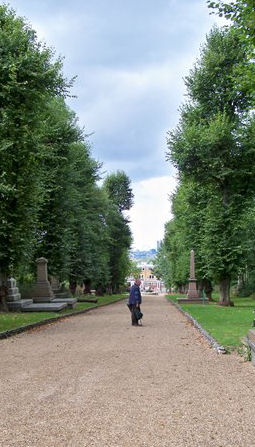 Above, Errol at the gate to Nunhead Cemetery. At right, Errol on the long drive from the viewpoint of the Anglican Chapel, with the cemetery gate in the distance. According to Errol, on a clear day you can see the London Eye, seemingly framed by the gateposts, but, “By the time I got out of the jungle the mist had descended so I did not get that picture.” 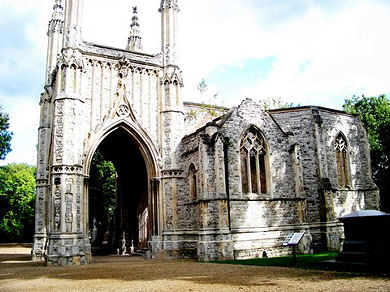 Above, the Anglican Chapel on the grounds of Nunhead Cemetery

Funeral services were held at the Anglican Chapel

Funerals would be conveyed to Nunhead railway station on special funeral trains. From the station the hearses would take over, and a horse-drawn hearse would come up the long drive and stop under the portico. A fleet of carriages would carry the mourners.
The service would be held in the chapel and then the mourners would follow the coffin to the grave site. The chapel roof was destroyed by fire in the 1970s, but the stonework is in perfect order and open air services are held in the shell of the building on special occasions.