John Chandler (1784-1854) was born in Minchinhampton and baptized there on 6 January 1784, the third child of John and Ann Chandler. His early life seems much like that of his siblings. He married Sarah Williams on 23 October 1803 at Minchinhampton, and they had two children: William, baptized 22 July 1804, and Susannah, baptized on 16 March 1806.

William married Charlotte Bellerd, lived at Littleworth in the parish of Amberley, and was a woollen cloth weaver.

John lost his first wife Sarah and remarried on 22 October 1811 at Stroud, Gloucestershire, to another Sarah – Sarah Millard, herself a widow.

John and Sarah had a son, Richard, in Minchinhampton in 1814.

Then the changes began.

At some time between 1814 and 1818, John and Sarah left the beautiful Gloucestershire countryside and moved 120 miles eastward to Southwark [pronounced Sutherk], lying just south of the River Thames as it flows through London. Hat making was a major industry in Southwark in the early 19th century. Heavy industry had moved into Southwark during the previous century. It was at Blackfriars Bridge that Boulton and Watt set up their infamous Albion Mills (possibly the ‘Satanic Mills’ described by local Lambeth resident and famous poet William Blake), the first steam-powered corn mill in Britain. It burned down in 1791 and was replaced by the great engineering work of John Rennie.* Southwark became a centre for iron-founding, wire-making, glass-making and other heavy industries. The rope works in nearby Bermondsey became one of the longest workshops in London. The whole river-front from Bankside to Greenwich [pronounced Grinitch] became a vast centre of ship building, ship breaking, anchor smithing, stave making, processing and storage.

It is not known with certainty, but these could have been the children of our Gloucestershire couple.

John continued as a hatter until his death caused by bronchitis, probably a result of the very poor air quality, on 16 September 1854.

He may have been preceded in death by Sarah 18 months earlier – a Sarah Chandler death was recorded in the Southwark registration district in the first quarter of 1853.

The first we hear of their son Richard as an adult is back in Gloucestershire at the time of his marriage. It is unclear at what age he left his parents in London and returned to the clean air of the county of his birth. Richard suffered and eventually died from chronic bronchitis, and it may have been that his constitution simply could not take the foul air of industrial London. He was a tailor when he married Joanna Merrett on 28 August 1837 in Woodchester, Gloucestershire – Joanna’s home town.

In the 1851 census of the village of Chalford in the parish of Bisley, Richard is recorded as a tailor, Joanna a seamstress, and they had a son, John Stephen (“Jack”), born in Bisley in 1837.

The 1856 Post Office Directory shows Richard as a tailor in the place of his birth, Minchinhampton. There is no evidence of other children.

As a young man, Jack fell out with his father and left home in his teens, probably to work as an apprentice tailor in London. He met the girl who was to become his wife in church. Mary Ann Surfleet was living at 6 Elleston Square in London and worked as a lady’s maid, far from her family home in Candlesby, Lincolnshire. It seems rather appropriate that a Candlesby girl should fall for a Chandler. She was born in 1835 and baptized on 28 February 1836, the eldest daughter of William Surfleet and his wife Ann formerly Farr.

Her father William was a bailiff at the Rectory Farm for John Allington, rector of Candlesby.

Mary Ann was one of 14 children, only four of whom reached adulthood.

She married Jack on 13 May 1861 in St Michael’s Church in the parish of St. Peter Pimlico, in the county of Middlesex (i.e. north of the River Thames, now a part of London).

Their first son, John William Chandler, was born early in 1862 in Finsbury, Middlesex, which is also now part of London.

By early 1863 the Chandler family had moved to Alford in Lincolnshire, Mary Ann’s home county, where the rest of the Chandler children were born. Jack established a tailor’s shop in West Street, Alford, with the financial help of his father-in-law, William Surfleet, who made a codicil dated 16 March 1863 to his will stating:

.. whereas I lately became bound with my son in law John Stephen Chandler of Alford in the same county Tailor for the payment of 236 pounds approx. borrowed of various persons for the use and benefit of John Stephen Chandler. If the Trustees are called upon to pay all or part of this it is to be deducted from Mary Ann’s share.

Witnesses to the codicil were John Alington, the rector of Candlesby (William’s employer), and Thomas Thimbleby, solicitor, of Spilsby, Lincolnshire.

By the time of the 1871 census, the “Tailor, Hatter and Woollen Draper” on West Street, Alford, was employing two men and two apprentices. That census shows the Chandler children as John W., Richard, Edgar, Emma M. and Claribel. Another son, Tom, was born three days after the census was taken.

A family reconciliation had obviously taken place, because Jack’s parents Richard and Joanna Chandler, both aged 56, had moved from Gloucestershire and are found in the 1871 census lodging in the South Street, Alford, home of widow Elizabeth Bradshaw. Between 1871 and 1881 Joanna Chandler died. By the time of the 1881 Census, Richard is shown as a widowed tailor aged 66, now lodging in the home of the Stockton family of Hamilton Place, Alford.

In total, Jack and Mary Ann Chandler had eight sons and three daughters, all of whom attended Daddy Ruston’s school in Alford at a cost of two pence per child per week. 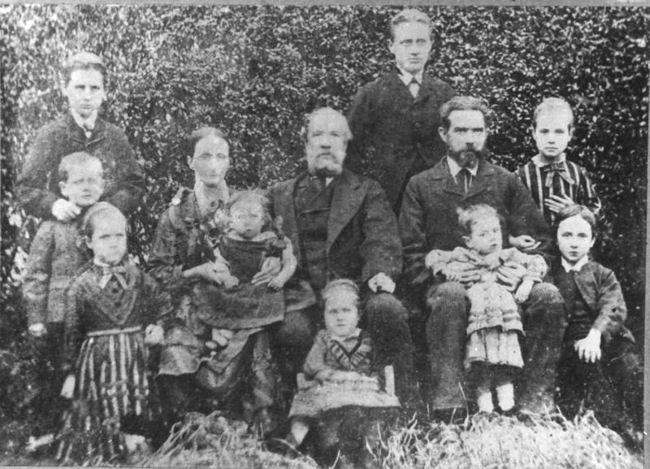 Richard became a religious man in his later years. In a letter to his granddaughter Claribel on the occasion of her winning a prize in a Biblical Study competition, he laments the fact that he did not serve his God half so faithfully as he had served his King and tells her “. . . then again, youth is the time to serve the Lord, but alas I was dead to such a real and lasting truth, consequently my life has been one of turmoil and worry, resting on broken reeds. Oh what a folly worse than madness”.

Richard died of chronic bronchitis on 27 March 1887, aged 73, at 34 North Gate, New Sleaford, Lincolnshire. His death was registered by his daughter-in-law, Mary Ann.

Jack Chandler was a very strict parent and his children were afraid of him, with the exception of Frank, who was the only one to rebel against his father’s strict Victorian discipline (see below.) All Jack had to do was look at the cane he kept on the wall above the fire, and the children would be quiet. He insisted that the girls all had to be home by 9.00 p.m. As a young woman, Marie went to a dance and, when she was escorted home by the local policeman afterwards, her father beat her for letting a man walk her home!

It is perhaps not too surprising that Jack’s hero was Napoleon. When Frank Chandler was born in 1874, Jack wanted to name him after his hero, but Mary Ann, who was usually quiet, insisted on the church steps that no son of hers would be known as Napoleon, hence the baby was christened Frank Napoleon.

John Stephen “Jack” Chandler suffered throughout his life with asthma and arthritis. He used a horse and trap to make deliveries to his customers. On 6 May 1891 his horse shied at a newspaper blowing in the wind, and Jack was thrown out of the trap, causing a terminal asthma attack.

He died at the age of 53, leaving a quite substantial personal estate of more than five hundred pounds to his widow Mary Ann. 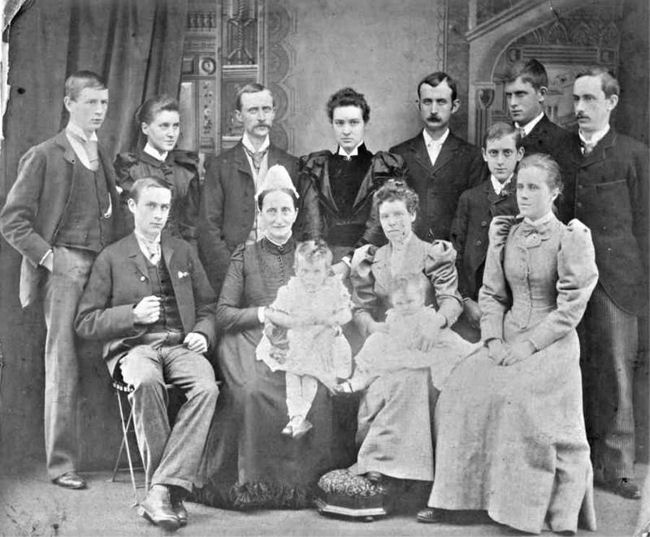 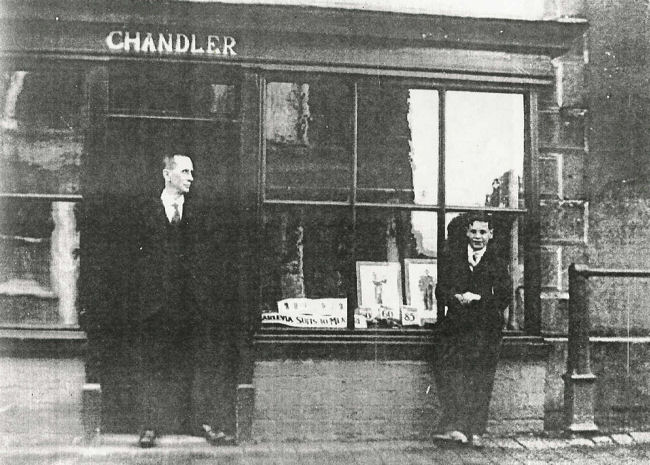 After Jack’s death, Mary Ann regularly visited her married children. Some of her letters to her daughter Claribel, written while visiting other children, have survived. They reveal great warmth and simple humanity. She died in 1913, leaving a substantial seven hundred pounds to be divided equally between all her surviving children and Agnes, the widow of her eldest son Will.

John Stephen “Jack” and Mary Ann (Surfleet) Chandler are both buried in Alford churchyard. Their children were:

1 Marriage and baptism records extracted from the Minchinhampton Parish Register under the controlled extraction process conducted by the LDS Church and recorded within the FamilySearch.com database.

2 Married 23 July 1826 per record extracted from the Minchinhampton Parish Register under the controlled extraction process conducted by the LDS Church and recorded within FamilySearch.com database.

4 Marriage record extracted from the Stroud Parish Register under the controlled extraction process conducted by the LDS Church and recorded within the FamilySearch.com database.

6 Baptism records extracted from the Christ Church, Southwark, London Parish Register under the controlled extraction process conducted by the LDS Church and recorded within the FamilySearch.com database.

7 Certificate of death of John Chandler at 13 Emerson Terrace, Southwark.

10 Baptism no. 2820 on 27 September 1847 by Thomas Keble (Vicar) recorded on page 90 of Bisley Parish Register. This baptism, when “Jack” would have been aged 10, may mark the religious awakening of his father Richard, noted elsewhere.

11 Baptism record extracted from the Candlesby, Lincolnshire Parish Register under the controlled extraction process conducted by the LDS Church and recorded within the FamilySearch.com database.

13 Baptism records extracted from the Candlesby, Lincolnshire Parish Register under the controlled extraction process conducted by the LDS Church and recorded within the FamilySearch.com database, and death records from General Register Office death index.

15 General Register Office birth index, registered at Shoreditch in the first quarter of 1862.

16 Copy of Will and Codicil in possession of family.

18 Alford Manor House, which lies in the same street as Chandler’s Tailor Shop did, has a collection of Nainby’s glass plate negatives – see http://alfordmanorhouse.co.uk/exhibitions-at-alford-manor-house and scroll down to the item about Edwin Rechab Nainby.

20 This information and all that remains on this page is condensed from “The Chandler Family Story”, written by Fenella Rook Smith.